Continue to live in harmony 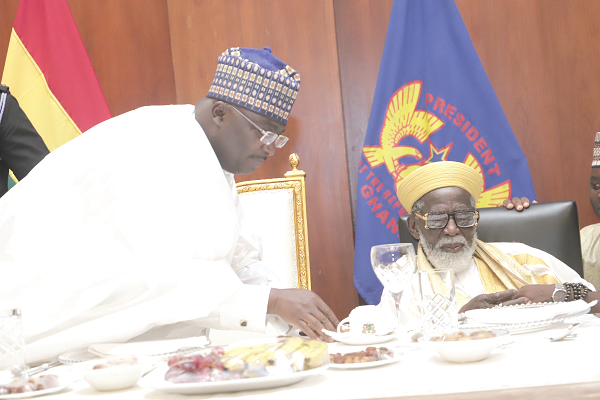 The Vice-President, Dr Mahamudu Bawumia, has charged Christians and Muslims to continue to live in harmony to entrench the enviable peace and security that the country is enjoying in a tumultuous region.

He said the secret to Ghana’s enviable position as the most peaceful nation in West Africa and the second most peaceful in Africa was as a result of religious harmony exhibited from the family level to all spheres of national life.

The Vice-President made the call when he addressed a gathering of Muslim clergy and followers at the Jubilee House in Accra last Thursday during the Iftar, the breaking of the Muslim fast.

This is the 19th day of the Ramadan fasting. Iftar is the time when Muslims are allowed to eat and drink after a long day of fasting from dawn until sunset.

Ten minutes after 6p.m, the gathering broke their fast with prayers and commenced with the drinking of water and fruits and later treated themselves to various sumptuous Ghanaian meals.

The ceremony, which commenced with Koranic recitals, attracted the leadership of both Christian and Muslim leaders which included the National Chief Imam, Sheikh Osmanu Nuhu Sharubutu, Father Andrew Campbell, Rev. Dr Paul Frimpong Manso, the General Superintendent of Assemblies of God and some members of the Christian Council.

The Vice- President described Ghana as a nation where all the different religions, particularly Muslims and Christians, were getting along so well and noted that “we take it for granted but other countries when they come here and see how we interact, how Muslims go to churches and celebrate they marvel at us.”

The Vice-President said this year’s Ramadan month was exceptional because it coincided with Easter, and the Passover.

He indicated that the Ramadan month was the same month that the Holy Quran, the Torra, the scrolls of Abraham as well as the Psalms and the Bible were revealed and described it as a unifying month.

He announced that in view of the reduction in the number of COVID-19 cases, this year’s Ramadan Celebration would be held at the Independence Square and not in enclosures as had been the case in the last two years.

The National Chief Imam commended Ghanaians for living in harmony irrespective of their religious affinity which had become the envy of other nations and had also earned it the grace of the Almighty God.

“Ghanaians must be grateful to God, irrespective of their political affiliation, they must unite and fight and stand for what would be in the interest of the nation,” he added.
He prayed for God’s continuous peace and blessings on the country and interceded for the rest of the world to experience peace and humanity.