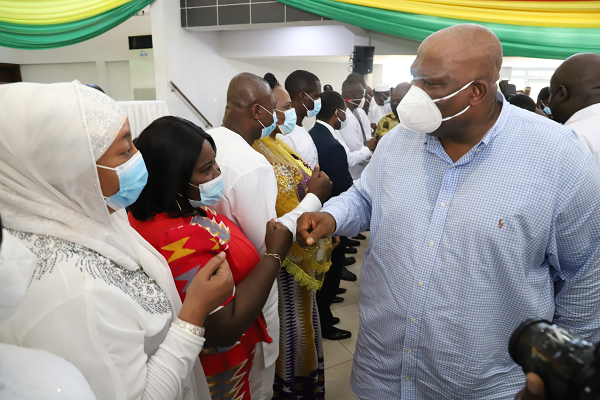 Twenty - six metropolitan, municipal and district chief executives (MMDCEs) in the Greater Accra Region have been sworn into office to begin work in their respective assemblies.

They were sworn into office by the Greater Accra Regional Minister, Mr Henry Quartey, at a ceremony held in Accra last Friday.

The nominees, Mr Mordecai Quarshie, LEKMA; Mohammed Bashiru Kamara, GCMA, and Latif Amanor, NiPDA, could not attain the needed number of votes to be confirmed.

Mr Quartey congratulated the MMDCEs on their nomination and successful confirmation by their respective assemblies.

He also expressed his appreciation to the over 600 assembly members for their massive endorsement of nominees in the region in the exercise of their statutory mandate.

“It is also gratifying to note that most of you have been re-nominated. This means we still have experienced members who will share their knowledge and experience with the new members.
There is, therefore, no time to waste. Your work starts immediately you leave here and so you must learn the rudiments of the job by reading and understanding all the relevant Acts and Model Standing Orders to appreciate what is at stake,” he said.

To ensure that they performed their functions effectively, the minister said the Greater Accra Regional Coordinating Council (GARCC) would periodically deploy its monitoring teams to inspect their activities.

He reminded them that they had taken office at a very crucial time when the development challenges facing the country, especially in the wake of the COVID-19 pandemic, were enormous and required the support of all.

With the expectations of people within their various jurisdictions being very high, Mr Quartey said it important for them to learn to do things differently else they could lose the trust and confidence that the people had placed in them.

For his part, the Minister of Local Government, Decentralisation and Rural Development, Mr Dan Botwe, urged the newly sworn-in officers to be proactive advocates for development.

According to him, the MMDECs had a responsibility to bring development to the people they were serving.