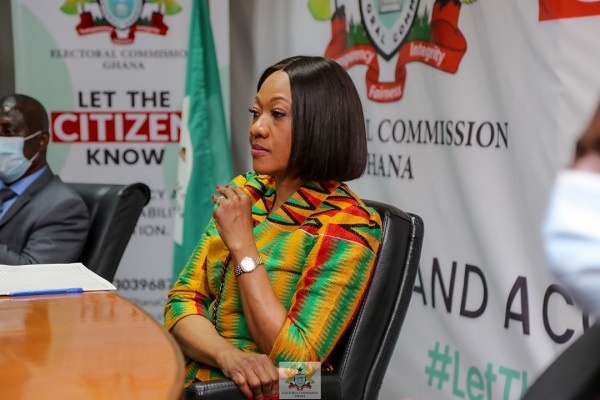 The Electoral Commission of Ghana has finally cancelled the certificates of 17 political parties who have no regional and national presence and therefore flouted the registrations.

The EC served the 17 political parties with a notice in early October and gave them up to Thursday, October 20, 2022 to show proof why their registrations should not be cancelled under the Political Parties Act of 2000, Act 574.

"Pursuant to the publication by the Electoral Commission dated 13th & 17th October 2022, the General Public is hereby informed that the Registration Certificates of the under-listed Political Parties have been cancelled in accordance with Section 15 (3) (c) of the Political Parties Law, 2000 (Act 574) effective the 1st day of November, 2022," a notice signed and issued by the Chairperson of the EC, Jean Mensa and published on Monday, November 14, 2022 stated.

"The commission has therefore struck out the names or the above-mentioned entities from the list of Political Parties in Ghana," the statement added.

The parties include the United Progressive Party (UPP) formed and being led by Kumasi based Akwasi Addae, popularly known as Odike.

Another one on the list is the United Front Party (UFP), which was also formed by Akwasi Addai Odike and Nana Agyenim Boateng popularly known as Gyataba but following disagreements, Odike moved out or was moved out to form a new party, the UPP.


Also on the list is the Democratic Freedom Party (DFP), formed by Dr Obed Yao Asamoah and some other members from the National Democratic Congress (NDC), who were unhappy with some developments in the NDC and therefore moved away to form the DFP after the 2005 national executive elections in the party.

The National Reform Party (NRP) led by Goosie Tanoh  and other breakaway members from the NDC in year 2000 is also on the list.

The Reform Patriotic Democrats, formed by Kwabena Adjei (Baabanta) is also on the list.

The Electoral Commission undertook a nationwide exercise to inspect the offices of all registered political parties in Ghana.

Following the nationwide inspection, it came to light that the 17 under-listed Political Parties have no offices at the National and Regional levels as required by Section 15 (1) (Act 574), the EC said in a notice, published in the Daily Graphic.

Below is the list of the affected political parties

An earlier version of this story wrongly attributed the formation of the Reform Patriotic Democrats (RPD) to Kofi Akpaloo instead of Kwabena Adjei (Baabanta).

The LPG is part of the political parties in good standing, that has constituency, regional and national presence when the Electoral Commission recently moved round to inspect political party offices.
The error is deeply regretted. We apologise to the LPG for the inconvenience caused.