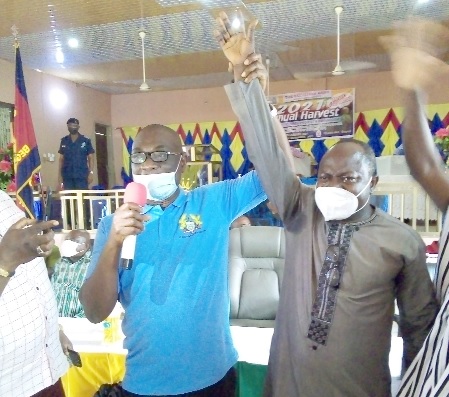 Thirty-Eight out of 40 members of the Fanteakwa North District Assembly have endorsed and maintained the President’s nominee, Mr. Charles Oware-Tweneboah as the District Chief Executive (DCE) for Fanteakwa North.

He was confirmed with 95 per cent of votes at an assembly sitting yesterday at Begoro, the district capital.

The exercise was carried outin 15 minutes in a serene atmosphere and with a display of zeal by assembly members, contrary to rumours that members had planned to reject his nomination.

Mr. Oware-Tweneboah shedding tears of joy, in his acceptance speech, thanked both the President and the assembly members for the confidence reposed in him to serve for a second term.

He said the main focus for the second term would be to ensure that unity existed between the members of the assembly and management to promote development in the district.

He pleaded with the assembly members to maintain the cordial relationship that existed in his first term of office so that together, they could continue with the good work to further develop the district.

The Presiding Member of the Assembly, Mr. Kwabena Brako-Boateng urged members to report any issue that bothered them to the Public Relations Committee (PRC) rather than discussing assembly issues outside.

The Eastern Regional Minister, Mr. Seth Kwame Acheampong thanked the assembly members for their confirmation and expressed the hope that they would continue to support the DCE for development of Fanteakwa North District.

Meanwhile, a 43-year-old teacher, Mr Sampson Tetteh Kpankpa, popularly known as King Jakpa, has been confirmed as the District Chief Executive (DCE) for Ada West in the Greater Accra Region.

Twenty out of the 21 assembly members who took part in the voting, voted ‘yes’ to confirm him while one voted ‘no’.

Mr Kpankpa, in his acceptance speech, expressed gratitude to the President for his nomination and the assembly members for his endorsement.

He said as a team player, he would engage all stakeholders in his work in order to move the district forward in development.

“My doors will always be opened for consultations and dialogue for the betterment of the district”, the new DCE assured.

The Greater Accra Regional Minister, Mr Henry Quartey, expressed his profound gratitude to the assembly members for the “one touch” endorsement.

He said the endorsement of the President’s nominee meant the Ada West District Assembly was in dire need of development which would surely be seen in some few years to come.

The Presiding Member of the assembly, Mr Philip Tettey Sai, assured the new DCE that the assembly would support him to lead the development agenda of the district.

“You must also cooperative with members of the house to do due diligence on issues that would move the district and the assembly forward.