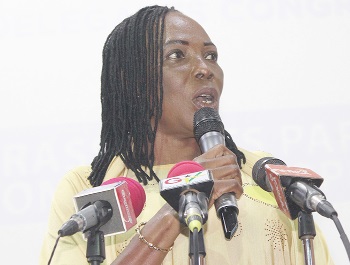 The Municipal Chief Executive (MCE) of the Accra Metropolitan Assembly (AMA), Elizabeth Tawiah Sackey, has called on assembly members to exhibit leadership within their electoral areas to promote national development.

She reminded the assembly members of their importance to national development, and the need for them to do the right things at all times.

Mrs Sackey made the call at the first national delegates congress of the Ghana Association of Elected Assembly Members (GAAM) in Accra last Wednesday.

The congress, which was on the theme, “The role of grassroots participation in national development, was attended by more than 100 elected assembly members from all 16 regions across the country.

It was aimed at discussing ways to improve the welfare of assembly members and how to empower them to better serve community members.

At the congress, Mrs Sackey also launched the Local Governance Excellence Awards 2022 by unveiling a brand new Honda saloon car to be awarded to the overall best assembly member as part of efforts to motivate them to be proactive in their work.

Mrs Sackey noted that she was able to climb the political ladder from the position of an assembly member, a Member of Parliament for Okaikwei North; a Deputy Greater Accra Regional Minister and now the Metropolitan Chief Executive of AMA, by doing the right things.

“You should see yourself as the leader for the community and in so doing, you must leave a mark and make sure you think outside the box and come out with new innovations; don’t just be an assembly member but a leader of the people.

“We are all one people and if democracy will be strengthened, it starts from the grassroots,” she stressed.

The President of the association, Mr Charles Adu Asinor, told the Daily Graphic that the meeting was also to afford them the opportunity to elect new executive members to champion the objective of the association.

“The event today is to elect new executive members to champion the cause of the association and the welfare of assembly members across the country.

“Although we have our mother association which is the National Association of Local Authorities of Ghana (NALAG), made up of all the MMDCEs, elected and appointees, our association is for only elected assembly members,” he noted.

Mr Asinor advised assembly members to support the association and appealed to corporate bodies to collaborate with the association to organise programmes in their respective electoral areas to promote development.