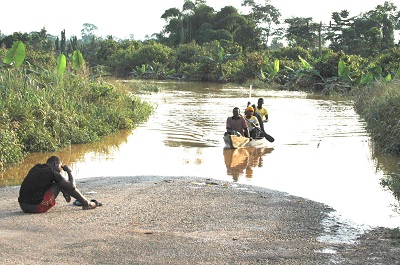 The Member of Parliament for Atiwa East, Mrs Abena Osei-Asare, has appealed to the government to establish a task force to protect the Birim River.

She said the river, once a clean source of drinking water for the inhabitants of the Atiwa area, had been heavily polluted as a result of galamsey activities.

According to her, the poisonous chemicals used by the illegal gold miners had rendered the river uninhabitable for fishes and other organisms,  which have  the river as their place of dwelling.

Mrs Osei-Asare was making a statement on the floor of Parliament yesterday.

According to her, the nefarious activities of the illegal miners had also resulted in the river gradually drying up and that if measures were not put in place immediately to stop them, the river would cease to exist in the next few years.

“Mr Speaker, the river is gradually drying up and if nothing is done soon, it would soon be gone,” she emphasised.

The MP stressed the harmful activities of galamsey operators and said it had become an open sore that the country needed to heal if it was to protect biodiversity and ensure sustainable economic development.

The Second Deputy Speaker, Mr Joe Ghartey, who was in the Speaker’s Chair at the time, took a serious view of the statement made to the effect that the river was polluted and drying up and said serious measures needed to be taken to protect the river.

Consequently, he referred the matter to the Parliamentary Select Committee on Environment, Science and Technology for action.

The Committee is expected to examine the issue, ascertain the facts and advise the Speaker accordingly.

At the commencement of public business, the Majority Leader, Dr Benjamin Kunbuor, presented before the House, the Deed of Security Confirmation and Amendments to the Mater Facility Agreement relating to the $3 billion loan facility between the government of Ghana and the China Development Bank.

The Minister of Finance and Economic Planning, Mr Seth Tekper, was expected to be in the House to present the papers but was absent, a situation which necessitated the Majority Leader’s action.