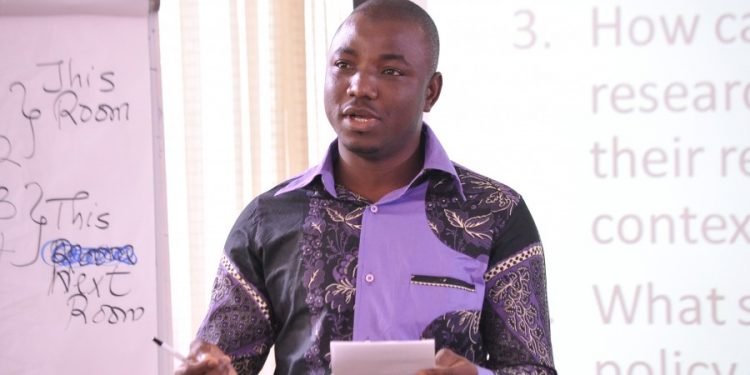 A Senior Lecturer at the Department of Political Science of the University of Ghana, Dr Seidu Alidu, has described the possibility of Parliament having an equally composed House as a good practice that will make it more diligent and enhance Ghana’s democratic process.

He said if the legislature should have an equal number of parliamentarians on both the Majority and the Minority sides of the House, it would help the House to exercise stronger oversight responsibility over the Executive and do away with “authoritarian-based decision-making process.”

“When there is an equally composed parliament, decisions will be taken largely on a more consultative basis and there will be broader consultations that will lead to consensus-oriented decision-making process,” he said.

Speaking in an interview with the Daily Graphic on the outcome of the December 7 polls and the possibility of Parliament having an equal number of members on both sides of the House, Dr Alidu said: “Authoritarian-based decision-making had not helped the country.

“At the end of the day, one political party will smuggle certain bills under a certificate of urgency even if it is not urgent and parliamentarians are not able to scrutinise that bill, budget or policy which ends up being passed and the ramification is that it often leaves the Ghanaian worse off,” Dr Alidu stated.

The senior lecturer stated that there were certain decisions that required an overwhelming majority on the floor of the legislature.

He, therefore, expressed optimism that if there should be an equally composed Parliament, both the Minority and the Majority would have to build bridges and consult widely.

“When you want somebody to back you with certain decisions, you have to be transparent about what you want so that they can help you,” he stated.

He expressed the view that Ghana’s democratic process had over the years been largely an authoritarian-based decision-making process, with those in the Majority having their way regardless of whether the decisions they took were right or wrong as long as such decisions favoured their political party.

Dr Alidu also said if Parliament did have an equally composed House, it would become a more diligent institution that would be able to keep check on the Executive arm of government.

“When we do not have an overwhelming majority on the side of the government of the day, it becomes very difficult for Members of Parliament to do the bidding of their government.

“When we have a larger majority, MPs usually want to catch the attention of the government so that they can be appointed into government and their ability to scrutinise the whole of the concept of exercising oversight responsibility over the Executive is thrown to the dogs,” he said.

On the contrary, the senior Political Science lecturer considered that with an equally composed House, the Executive would definitely want to build bridges with the Legislature.

“This is because when the government has to pass an important bill or budget, or want an approval for a loan that requires absolute majority, the government will have to consult the Minority and the Majority to get that kind of stakeholder buy-in.

“This approach will ensure accountability, checks and balances which will help our democracy and this will do the Ghanaian some good.

To bolster Ghana’s democratic process, Dr Alidu called for a second look at the electoral system currently being practised in Ghana, especially at the parliamentary level.

“We should introduce a new electoral system that is able to give the opportunity to smaller political parties to be elected, especially in areas where they have stronger majority or are popular,” he suggested.

That, Dr Alidu added, would result in a more diverse Parliament in terms of political positions, ideology and representation and it could cure some of the ills that had bedevilled the electoral systems that “we have been practising and entrenching the duopoly.”

In another development, a Professor of Political Science at the University of Ghana, Legon, Professor Atsu Ayee, said an important lesson from the conduct of this year’s polls was for Ghanaians to fine-tune the conduct of electoral circles whereby mistakes made in past elections would not be repeated.

He said the problem of good lighting system which would make counting of ballots easier after elections had been with the country since 1992, but the nation was still battling with a poor lighting system which many a time had been the cause of delayed counting at both the polling stations and collation centres, (refer to page 18).