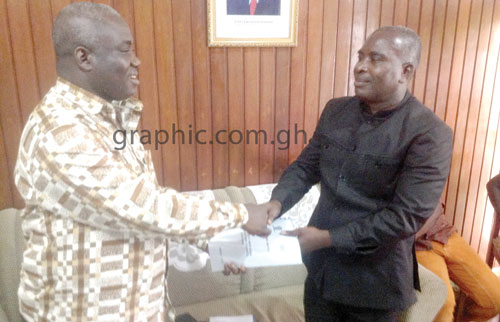 The outgoing Brong Ahafo Regional Minister, Mr Eric Opoku, has called on Ghanaians to embrace the recent reshuffling of regional ministers by President John Dramani Mahama since it is for the good of the country.

He said the President had a wider view of what he was doing and, therefore, that must not be misconstrued as an attempt to make the work of the newly appointed regional ministers difficult.

Mr Opoku made the call when he was handing over to Mr Paul Evans Aidoo, the former Western Regional Minister, who is taking over as the Brong Ahafo Regional Minister, at a brief ceremony at the residency in Sunyani, the regional capital.

Mr Opoku was first appointed as the Brong Ahafo Regional Minister but later reassigned to the Ashanti Region, after the reshuffle by the President a couple of weeks ago.

He also said the President, in his own wisdom, reshuffled the ministers to ensure efficiency, promote national unity and social cohesion and, therefore, appealed to the chiefs and their people to cooperate with the incoming minister to enable him to discharge his duties efficiently.

Mr Opoku said the chiefs wanted the total development of their respective traditional areas, therefore, they must cooperate with the new regional minister to ensure that development.

Mr Opoku, who described his successor as an astute and experienced politician, wished him well and called on chiefs to offer him their unflinching support to enable him succeed.

Mr Aidoo, for his part, reiterated the call by his predecessor for Ghanaians to embrace the change since the  President meant well.

He also said he was happy to be in the region since he had been interacting with some  Brong Ahafo citizens who were mostly cocoa farmers working in his constituency, Sefwi Wiaso, in the Western Region.

Mr Aidoo expressed the hope that the same assistance given to his  predecessor would be offered him by all the people, including the various municipal and district chief executives and party executives to enable him work successfully.

He later paid a courtesy call on the Omanhene of the Sunyani Traditional Area, Nana Bosoma Asor Nkrawerie 11 at his palace where he was introduced to the Sunyanihene and members of the traditional council.