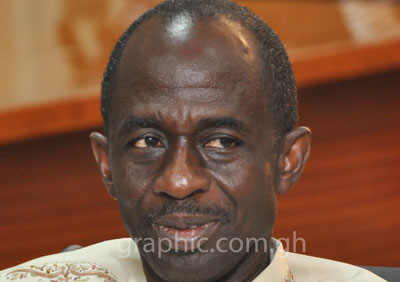 The General Secretary of the National Democratic Congress (NDC), Mr  Johnson Asiedu-Nketia, yesterday concluded his evidence-in-chief in the ongoing presidential election petition at the Supreme Court.

Led in evidence by the lead counsel for the NDC, Mr Tsatsu Tsikata, the witness, who is popularly called General Mosquito, was very interesting to watch as he made the exercise lively by his incessant smiles, the wiping of his face with a white face towel and head movements.

Mr Asiedu-Nketia was launched into action when counsel asked him to give examples of the bad faith imputed to the petitioners by the NDC.

He said by that he meant that the petitioners were behaving in a manner that suggested that when their party was winning the election, the process was free and fair, but it was not fair when they lost.

He said when the results of the presidential election were being relayed by the Electoral Commission (EC) through the various media houses, the petitioners and their party, the New Patriotic Party (NPP), praised the system for an excellent job and the EC for performing creditably, but when they started losing they brutalised some media personnel.

Asked whether he had heard Dr Mahamudu Bawumia, the star witness for the petitioners, testify that he was not aware of any statement made by a representative of the NPP in connection with the free and fair nature of the elections, the witness said that he did not know where Dr Bawumia was at the time.

According to him,  immediately an appeal was made by President Mahama that the EC should allow people who were having problems with biometric verification to be allowed to vote, Mr Boakye Agyarko, an NPP activist, went out to congratulate the EC for work well done job and declared the election as free and fair.

Subsequently, he said, he heard another statement by the General Secretary of the NPP claiming victory for the party and urging its members to wear white on Sunday for church.

Many prominent people within the NPP, Mr Asiedu-Nketia said, also made statements along the same line.

He said those statements were made at a time the earlier results had the NPP leading, so the party jumped to the roof top praising the EC and the media for a job well done and in that process nobody challenged that position until the results started changing.

He said when the NPP realised that it was losing, it accused the EC of several things, such as declaring different results from those being declared at the collation centres.

He said the party also accused the EC of conducting elections outside the country and that the results had been compromised, but that statement was objected to by Mr Philip Addison, the lead counsel for the petitioners, who said that had not been pleaded.

The objection was sustained by the court and that line of answer was accordingly expunged from the records.

During cross-examination by Mr Addison, the witness gave his understanding of over-voting and did not agree to that given by the petitioners.

He disagreed with counsel that he had said that when foreign materials were found in a ballot box, then there was over-voting, pointing out that the election was not in any way compromised.

Regarding the claim that the figure declared on the pink sheet was greater than the ballot papers issued, witness said that could clearly be described as an error.

The primary record of declaration of results, he said, was where the tally for each presidential candidate had been entered and attested to by polling agents.

The witness said there was an opportunity for any objection raised to be recorded and so far as such an objection had been recorded at the time and place, it mattered.

He said it was the EC which conducted elections, while the presiding officers, who were in charge of the polling stations, had to sign the pink sheets, together with polling agents.

Mr Asiedu-Nketia said election results could be declared if polling agents did not sign, provided the presiding officer signed, although the agents must give reasons for not signing.

He said there was no order as to who was to sign first and that what mattered was that those who were supposed to sign had done so.

A question that sought to elicit a legal response as to whether if a presiding officer did not sign a pink sheet it constituted an irregularity was not allowed following an objection by Mr Tsikata, which was sustained.

Mr Asiedu-Nketia agreed with counsel that if the official mark of the EC was not on a ballot paper, that paper would be rejected and that both documents were different, such that the effect of one did not affect the other.

He said a provisional register carried information on the number of people to be registered and transferred onto the national register and that was the daily print out of registered voters.

The witness said the EC gave out the  provisional register to all agents of the political parties which participated in the election.

When his attention was drawn to the fact that the NPP was not provided a provisional register, Mr Asiedu-Nketia said maybe the NPP’s agent did not send their copy to the party, since all the other parties were given copies.

The witness could not tell the court when any of the petitioners made statements regarding the free and fair nature of the elections.

He said ballot papers were the only documents that had serial numbers.