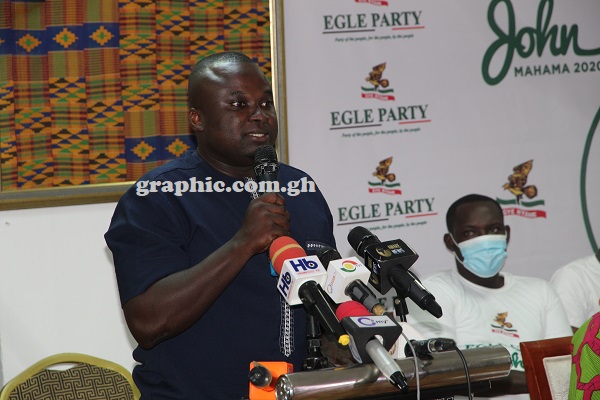 The Every Ghanaian Living Everywhere (EGLE) Party has announced its endorsement of the National Democratic Congress (NDC) candidate John Mahama for President.

The party which did not file nominations to contest the presidential or parliamentary elections because of financial challenges has also endorsed the candidature of all NDC parliamentary candidates for the December 7, 2020 polls.

Addressing the National Conference of the EGLE Party today (November 11, 2020) in Accra, the General Secretary of the party, Mr David Arthur said the party would now deploy all its resources to support the NDC at the national, regional and constituency level.

He added that the decision to back Mr Mahama and the NDC was because the EGLE party shared the same ideas with regards to developing the country.

"The National Democratic Congress led by President John Dramani Mahama and the EGLE part have so much in common. Consequently, the EGLE party upon reflection and thorough consultations with the rank and file, the founder, the grassroots and the National Executive Committee unanimously agreed not to file candidates for both the Presidential and Parliamentary elections across the country, but rather mobilize all effort and command of the party to throw its weight behind His Excellency John Dramani Mahama and the National Democratic Congress in this 2020 General Elections," Mr Arthur said.

"The EGLE party, in line with its quest to help the NDC win the election, will from today, deploy members to join the NDC campaign teams at all levels - Constituency, Regional and at the National level. The EGLE party will, however, run separate campaigns also for H.E. John Dramani Mahama, in line with the same agenda.

"As a social democratic party interested in the social and economic development of our people, we have a social responsibility to work towards the unseating of this incompetent, inept and corrupt family and friends sakawa government. Indeed, it is a social responsibility of every Ghanaian to ensure the end of the wanton dissipation of public funds and state resources on only one family in the country".

Other reasons for backing Mahama

Mr Arthur also stated that the party decided to support Mr Mahama because he safeguarded Ghana's democracy and improved the national infrastructure during his first term.

He said unlike President Akufo-Addo who had borrowed huge sums just for consumption, Mr Mahama constructed many roads and hospitals in his first term.

"Ghana is bleeding under the deceptive leadership of President Akuffo Addo and Vice President Bawumia. A government that promised it will not borrow and which, while in opposition, told us the money to develop Ghana is right here in Ghana, has suddenly made a U-turn and borrowed the country over the last three years into HIPC status. This is unacceptable and certainly not what we voted for. This government has borrowed over 140 billion Cedis and yet has nothing to show for it. Not a single school, not a single hospital, not a single university, and we haven't seen the construction of any major roads. No wonder the government is all over claiming projects of the previous administration as well as projects of private entities all in the bid to deceive the public. The question is where is our money? 140 billion in less than four years and nothing to show for it?

"We all saw the massive infrastructure development undertaken under the previous administration led by John Mahama who had just about 54 billion Cedis at his disposal in loans. We saw schools all over the country from basic to tertiary, he added a new public university, built over 4,000 health facilities, regional hospitals, district hospitals, polyclinics and thousands and thousands of CHIPS compounds. Terminal 3 at Kotoka, Tema Harbor expansion project. Interchanges at Pokuase, Circle, Obetsebi Lamptey and the Tema motorway roundabout are all the legacies of President Mahama. Today, Ghana produces its own gas courtesy president Mahama and the NIDC. President Mahama dealt with Dumsor head-on and resolved it, it's the reason President Akuffo Addo can give free lights for vote today, He expanded access to water both urban and rural, adding over 40 million gallons of water daily to Accra under 4 years which is why President Akufo-Addo can give free water for votes. This is how nations are developed, we in the EGLE party has yet another reason to endorse President Mahama. He is the epitome of development. Fellow Ghanaians let's all choose progress and development, let's choose John Mahama. The man who was hailed as a champion of democracy and human rights advocate is today presiding over lawlessness, state of insecurity and abuse of human rights".

Accepting the endorsement on behalf of the NDC, the National Communications Officer, Mr Godwin Ako Gunn expressed gratitude to the EGLE Party for their continuous support.

"The NDC is glad to have the support of the EGLE Party, we have been in the trenches with them for a while, especially in our protest against the compilation of the new register," Mr Gunn said.

"This fight to save Ghana is not about the NDC. It's about the people of Ghana, it's a rescue mission and everyone must get involved".

In an address to open the conference, the National Chairman of the Party, Mr Kwaku Agyekum Asare said the country had witnessed the "lowest form of government" under the first term of the Akufo-Addo led New Patriotic Party.

He also urged the electorate to vote for Mr Mahama to end the "lies and deception" of President Akufo-Addo.