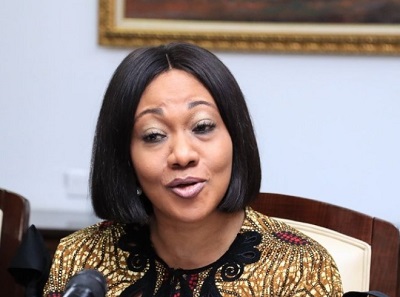 The Chairperson of the Electoral Commission (EC), Mrs Jean A. Mensa
30.5k Shares

The Chairperson of the Electoral Commission (EC), Mrs Jean A. Mensa has filed her witness statement in the December 7, 2020 Election Petition case currently before the Supreme Court.

In her statement, Mrs Mensa has denied that the Commission padded votes in favour of Nana Addo Dankwa Akufo Addo, the President-elect and second respondent in the case.

According to the EC boss, former President John Dramani Mahama, the Petitioner" is not entitled to the reliefs he claimed".

She explained that the actual figures President Nana Addo obtained was 51.295 percent which met the "more than 50 per cent threshold in Article 63(3) of the 1992 Constitution."

The EC boss’ witness statement is in line with the Supreme Court’s orders given to parties in the Election Petition suit filed by Mr Mahama.

In her statement, Mrs Mensa indicated that she was the Returning Officer of the December 7, Presidential Election.

She said the Public Election Regulation 2020 (CI 127) regulated the December 7, 2020 Election laid out four stages for collating of Presidential election result from Polling station all the way to the Head office of the Commission.

According to her, at all the four stages, the summary of the various votes were collated and recorded on Form 8B (Statement of Poll and Polling station results form) form 10, 12 and 13.

She said candidates or their agents who fail or refuse to sign the forms are provided with the opportunity to state reasons for their refusal to sign on the form and Officers in charge provide a duplicate carbon copy of the summary sheet to each of the candidates or agents present.

"The calculations showed that the second respondent (Nana Addo) has more than 50 per cent of valid votes.

It was clear that whatever results were outstanding at the time could not mathematically change the more than 50 per cent of valid votes as obtained by the second respondent (Nana Addo).

It was on this basis that the results of December 7, 2020, Presidential Election was declared on December 9, 2020.

She said in announcing the figures, the total number of votes cast being 13,434, 574 was inadvertently announced as the total votes.

The EC Boss said the form 13 had a total number of votes cast as 13,434,574 and the form 13 was signed by eight agents of the Petitioner who were present at the time of the compilation of the form.

She admitted that there were some errors but indicated that, that "didn't affect the constitutional threshold of the candidates".

Mrs Mensa said when the errors were detected, the next day, those errors were corrected through a press release which was published on the commission's website and other social media platforms or pages.

According to her, the authenticity of the Press release had never been denied.

Hence on December 9, 2020, the EC Chairperson declared the election results without that of Techiman South which had 128,018 register votes.

"This declaration was made on the basis that even if the said Constituency being 128,018 were allocated to the candidate with the second-highest votes (the Petitioner), it would not change the more than 50 per cent.

“The Techiman South Constituency has vindicated the mathematics basis on which the results were decided."

She said when the figures on form 10 of the Techiman South Constituency were added to the existing votes obtained by candidates, Nana Addo obtained 6,776, 792 while Mr Mahama obtained 6,266,923 votes.

Mr Mahama is at the Supreme Court challenging the validity of President-elect in the December 7 Presidential Election.

He had accused the EC of votes padding among others.

The court had ordered parties namely the EC and Nana Addo to file their witness statements.