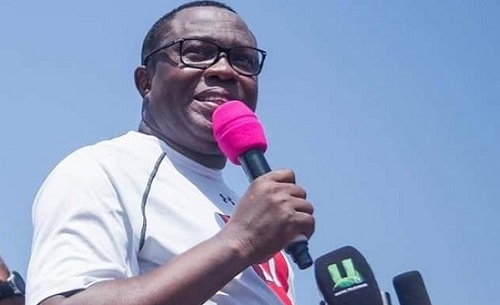 The opposition National Democratic Congress (NDC) is accusing the Electoral Commission (EC) and the National Identification Authority (NIA) of devising means to deny about 11 million Ghanaians the chance to vote in the upcoming 2020 general elections.

The plans, the National Chairman of the party, Mr Samuel Ofosu Ampofo believes, were to rig the elections in favour of the incumbent New Patriotic Party (NPP) government.

He explained that the decision by the EC to use only the Ghana Card and passport as the only required documents to get registered as a voter in the country was a calculated plan by the Akufo-Addo administration to rig the upcoming elections.

Mr Ampofo who was addressing a press conference in Accra at the party's headquarters on Thursday, May 14, 2020, titled: “The Electoral Commission's ploy to rig the 2020 general elections, in concert with the National Identification Authority”, said many Ghanaians were not able to register for the Ghana card, and that many Ghanaians also do not have a passport, the other requirement.

He said according to the data of the NIA, out of about the 17.3 million people who are 18 years and above and who are said to have been captured by the NIA during its registration exercise, only 6.5 million have been issued with the Ghana card.

That, Mr Ampofo explained, means that "almost 11 million (62 per cent) of eligible voters will have to go through the sworn oath option to be able to register for a voters' ID, if the register for the 2020 general elections materialises."

That, he said, upon extensive consultations with all stakeholders, including political parties, the following registration requirements such as birth certificate, voter identity card, driver’s license, passport or a baptismal certificate were provided under section 8 of Act 750 to establish one’s eligibility to be registered by the Authority for a national ID card.

Mr Ampofo noted that the “the exclusion of the voters’ ID card from the requirements of registration for the national ID card by the Akufo-Addo government, was part of a well calculated scheme to disenfranchise a good number of Ghanaians from acquiring the national ID card (Ghana card), which was to be used subsequently, as one of the registration requirements in the new voters’ register plan they had long hatched.”

“As we predicted, the Ghana Card registration process by the NIA has been very slow such that till date, the process which commenced with a pilot late 2017 and was supposed to be completed in one year, has been able to register only 11,062,055 out of about 19 Million Ghanaians (15 years and above) who are eligible to be registered. Even more bizarre is the fact that, out of this 11 million Ghanaians who have been registered, only 7,074,048 have been issued with cards (per NIA’s own website https:nia.gov.gh) as at 2nd May, 2020),” he explained.

He said in spite of several assurances made in Parliament and in the media by the President, the Head of NIA and Electoral Commission that “the Ghana Card is not going to be used for the 2020 elections, the government and the Commission are currently pushing a legislation in Parliament to make the Ghana Card and Ghanaian passport the main breeder documents for registration as a voter, thus excluding the use of the Commissions' own existing voters’ ID card.”

According to Mr Ampofo, “The objective is to disenfranchise a significant number of persons in NDC strongholds in furtherance of the Jean Mensa-led EC’s grand scheme to rig the 2020 general elections for the New Patriotic Party.”

He was of the view that the EC boss’ mission and motivation was to please President Akufo Addo and ensure his re-election for a second term.

He said President Akufo-Addo was “not concerned about the future of Ghana, its peace, stability and the survival of democracy”, adding that “Having failed to deliver on his promises to the people of this country, and seeing defeat staring glaringly at him, he in conjunction with the Jean Mensa-led EC and the Ken Attafuah-led NIA are desperately scheming to rig the 2020 general elections and hold on to power at all cost,” Mr Ampofo stated.

Read also: With or without new register, NPP is prepared to win 2020 polls - Mac Manu