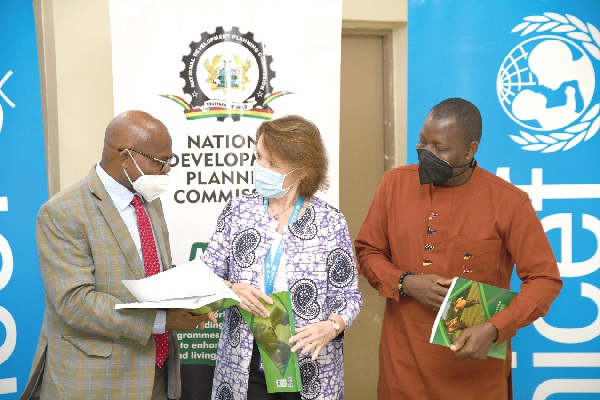 Seven municipal and district assemblies (MDAs) have been ranked as the most well-endowed local assemblies in terms of access to education, health, water, sanitation and other development variables.

The rest of the development indices are information and communication technology (ICT) and governance based on which the 260 metropolitan, municipal and district assemblies (MMDAs) were assessed for the District League Table (DLT).

The DLT report was launched in Accra yesterday by the United Nations Children’s Fund (UNICEF) and the National Development Planning Commission (NDPC).

The UNICEF developed the DLT in partnership with the Centre for Democratic Development-Ghana (CDD-Ghana) and it is implemented by the NDPC.

The DLT is a tool that provides an overall assessment of disparities in national development in the country by ranking all the 260 districts to determine the most developed and most challenged across the five sectors on which they are accessed.

The DLT has been produced and disseminated annually since 2014, with various modifications on indicators and methodology.

The seven leading assemblies which scored above 70 per cent in the five key development index variables used for the assessment are the Adentan, Ga West, Ayawaso West, all in the Greater Accra Region, Awutu Senya East in the Central Region, Kpone Katamanso municipality in the Greater Accra Region, Tarkwa-Nsuaem municipality in the Western Region and Gomoa East District in the Central Region.

The Adentan Municipal Assembly scored 78 points to emerge the overall best in the country, 26 other MMDAs scored above 60 per cent and were ranked from eighth to 33rd.

The Sene East District in the Bono East Region was at the bottom of the league table, ranked 260th, topping the list of 10 districts with the least score in the DLT. The rest are Akatsi North in the Volta Region, which ranked 251th, Chereponi, Mamprugu-Moagduri and Yunyoo-Nansuan districts in the North East Region were ranked 252th, 254th and 258th respectively, while Mion District and Savelugu municipality in the Northern Region were ranked 253th and 257th respectively on the table.

The others are Diffiama-Bussie-Issa and Wa East districts in the Upper West Region which were ranked 255th and 256th in that order, with the Sekyere Afram Plains District in the Ashanti Region ranking 259th on the table.

The MDAs that had the least score, the report indicated, was as a result of their geographical location and were less endowed in terms of access to the five development variables used for the assessment.

Speaking at the launch, the Director-General of the NDPC, Dr Kojo Mensah-Abrampa, said the report was not to assess the performance of metropolitan, municipal and district assemblies (MMDCEs) but to highlight districts that were doing well and those challenged in terms of well-being of their populations.

He said the DLT fell in line with the mandate of the NDPC as enshrined in the 1992 Constitution to contribute to policy formulation at both the national and local levels, saying the objective of the DLT was to provide the evidence and basis for more equitable resource allocation and social investment to reduce disparities between districts.

The Head of the Local Government Service, Nana Dr Ato Arthur, who was the guest of honour, said the service would work closely with assemblies that did not perform better on the rankings to determine the shortfalls and the support for them and bring them at par with that of performing ones.

In the education sector, the Ga West municipality in the Greater Accra Region was ranked first in the top 10 category, while the Ayawaso North municipality also in the same region was at the bottom of the least scoring MDAs with the 260th position.

At the regional level in the education sector, the Central Region ranked first with 35.4 per cent score, with the Savannah Region scoring 15.5 per cent to place last.

The Shai-Osuduku District in the Greater Accra Region took the foremost spot in the top 10 MDAs in the health sector, while the Ablekuma West municipality in the same region was ranked 260th.

In the regional analysis for the health sector, the Northern Region came first with the Volta Region placing last, with many of the lowest ranked in the Southern part of the country.

In the water and sanitation sector, the Adentan municipality ranked highest in the top 10 MDAs, while the Chereponi District in the North East Region occupied the bottom position on the table.

In the ICT sector, the Ablekuma North municipality in the Greater Accra Region ranked first in the top 10 that indicated that the use of ICT has been concentrated in the nation’s capital (Greater Accra Region), while the Mion District scored zero per cent and occupied the bottom position in ICT sector with the least ranked districts largely located in the Northern part of the country.

That the report is an indication of an unequal provision and distribution of ICT access and use in the country.

On the governance sector, Saboba District in the Northern Region took the foremost position, with the Savelugu municipality in the same region recording zero per cent in that sector.

In the regional analysis, the Greater Accra was first in the governance sector with the Oti Region taking the last position.