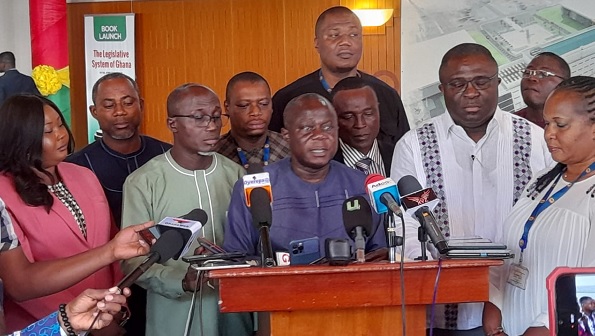 Members of Parliament (MP) of the New Patriotic Party (NPP) from the Ashanti Region have urged their constituents to exercise restraint and use dialogue to resolve the issues surrounding roads and other projects that have stalled in the region.

The appeal by the Ashanti MPs caucus of the NPP to their constituents is coming on the heels of last Monday's (July 18, 2022) attacks on the Majority Leader in Parliament and MP for Suame, Osei Kyei-Mensah-Bonsu by some of his constituents at the Suame Magazine area.

Mr Kyei-Mensah-Bonsu who is also the Minister of Parliamentary Affairs was in his constituency to meet with his people to explain why the delay of some road projects in the area have stalled but he was pelted with sachet water and stones for failing to fix the bad roads in the area.

Addressing journalists on the unfortunate incident that occurred in Suame involving the Majority Leader at the Parliament House today, Thursday, July 21, 2022, the MP for Asante Akyem Central and chair of the Constitutional, Legal and Parliamentary Affairs Committee, Kwame Anyimadu-Antwi called on the people who took part in that incident to go to their leaders and apologise.

"We condemned this act and called on our constituents to exercise restraint", he stated.

He called on their constituents not to use violence to resolve the issue and also stop the threatening behaviour and use the right channels to address their grievances.

He, therefore, gave the assurance that all the road projects and Infrastructure for Poverty Eradication Projects (IPEP) started by the NPP government would be completed to bring about confidence in the ruling government.

Mr Anyimadu-Antwi, who is also the chairman of the caucus of the Ashanti Regional NPP MPs said from August 1 to September 30, 2022, they would be in their various constituencies to engage with their constituents to let them know what is being done to address the stalled road projects and the others in their respective areas.

He noted that while some of the projects have been completed others were ongoing, saying that the projects that have stalled do not mean they have been abandoned.

He mentioned some of the projects that the government has undertaken in the region as Kumawu/Fomena and Konongo hospitals which are almost completed, also Atwima Nwabiagya military hospital which is also ongoing, Tepa hospital which has been completed and many other projects in the Ashanti region including the several extension projects at the airport in the region.

He said the region was a beneficiary of 277 kilometres of asphalt overlays in the inner city of Kumasi as well as some interchanges.