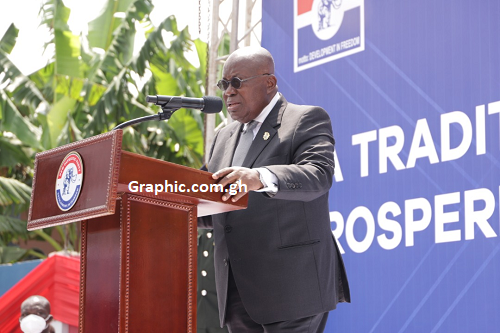 President Nana Addo Dankwa Akufo-Addo has said the New Patriotic Party (NPP) government has the policies and programmes to confront challenges of the country.

While admitting that Ghana was currently faced with some difficulties and challenges, he said the NPP government remained the best option to overcome those challenges.

“Yes, the nation is facing challenges and difficulties, but these challenges can and will be overcome. This is because we have the policies, programmes and values that will enable us to continue our journey of development in freedom,” he said.

The President said this at a lecture in Accra yesterday to commemorate the 29th anniversary of the NPP.

President Akufo-Addo said while the party had gone through some turbulence and challenges, it had consistently emerged stronger.

He stressed the need to further strengthen the party to ensure that it won the 2024 elections.

“Strengthening our party will mean one thing and I am very confident about it; I am very confident that on 7th December, 2024, the new NPP presidential candidate will win the election. Our objective and responsibility are to do whatever it is to make sure that that victory is forthcoming.

“We have to continue our way forward in Ghana. We can’t accept the backsliding that takes place every now and then which doesn’t benefit our nation. The foundations that we are laying today for the prosperity of our nation are going to be shaken if, again, through our own fault, we allow the path of progress to be diverted,” President Akufo-Addo stated.

The President said although it was a day for celebration, the COVID-19 pandemic had made it difficult for the party to celebrate the occasion with the freedom that it would have liked.

“We cannot overlook this awful pandemic, and that is why we have to do this celebration in a muted way. But be that as it may, everybody who subscribes to the values of the party, wherever you are, today is a day for celebration and it is a day that we are able to say that we will continue to be in the service of the country,” he said.

The Chairman of the NPP, Mr Freddy Blay, for his part, said the party’s almost three decades of existence felt like a short time.

“It seems like only a few years ago when our founding fathers planted the roots of our party, drawing inspiration from some of Ghana’s greatest politicians and statesmen in the United Gold Coast Convention (UGCC) era.

“Our party today is a continuation of that rich political tradition and we celebrate our 29th year as a trusted and more formidable force in Ghana’s political landscape.

“As we do so, we are proud of contributing to the rich foundations of democracy and national development of our nation,” Chairman Blay stated.

Mr Blay noted that the NPP had a strong belief in freedom in a liberal state, a commitment to free enterprise and private initiative.

That, he said, had helped position the country as a place of economic growth and prosperity.

“Our founding fathers will be proud of the numerous social interventions and development policies we have initiated towards alleviating the plight of the average Ghanaian, transforming the economy and, above all, good governance,” he said.

Mr Blay urged members of the party to use the anniversary as a moment to reflect and rededicate themselves to the values of the party.

“We must use this opportunity to reflect on our performance and assess our values and recalibrate ourselves to ensure our continued relevance as a party committed to building a better Ghana and a brighter future.

“Let us commit ourselves to the true ideals of patriotism that are embedded in our history. We must renew our commitment to the relentless pursuit of selfless dedication to service in the interest of not only our party but also our country Ghana,” he advised.

The General Secretary of the party, Mr John Boadu, for his part, said the NPP had been a champion of electoral reforms in the country.

He said the party had, over the years, ensured a quantum leap from a manual voters register to a biometric register.

“In spite of the disruptive threat of COVID-19, Ghana’s general election of 2020 has been hailed as perhaps the cleanest, freest and fairest and most peaceful,” Mr Boadu said.

The general secretary noted that for the first time in the country’s electoral history, the 2020 general election was fully funded by the government, without any foreign aid.

“Out of the eight elections held since 1992, the 2020 elections were the first ever entirely funded by government. We are leaving a mark on democratic governance in the country,” he said.

The NPP, a centre-right liberal-conservative political party, was formed on July 28, 1992 at the start of multiparty democracy in that year which ended a protracted military rule.

It is one of the two dominant parties in Ghanaian politics.

It has contested all the eight elections in the Fourth Republic, although it boycotted the maiden parliamentary election in 1992.