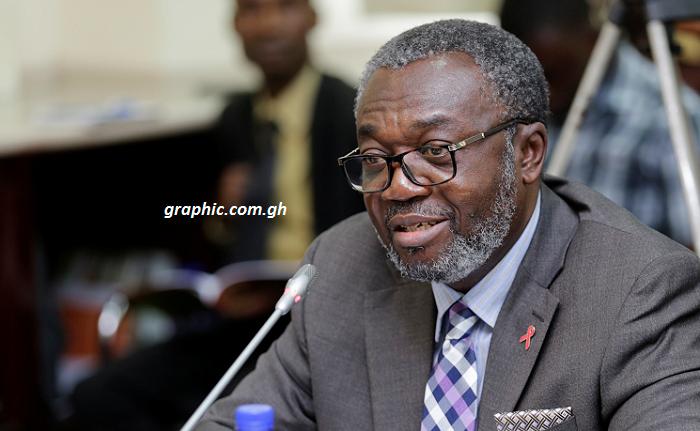 The Presidential Advisor on Health, Dr Anthony Nsiah Asare has said that the formation of a parallel team on the Coronavirus disease by the opposition National Democratic Congress (NDC) was not necessary.

According to him, the move was an unnecessary favour seeking attempt by the opposition party since the team President Nana Addo Dankwa Akufo-Addo has already formed to tackle the disease was not a partisan one and it involves professionals from all sectors.

He rather called for a non-partisan approach to fight the disease and added that, in the districts and the regions, those who are leading the fight against the disease were professionals and expressed concern about how everything in Ghana has been unnecessarily been politicized.

"You don't have to call Professor so, so and so, once you do that by forming such groups, you push them to political affiliations, we should stop that."

He was speaking in a radio interview on Accra based Asempa FM's Ekosii Sen programme on Monday afternoon [March 23. 2020] monitored by Graphic Online.

He said he has seen the list of the team put together by the opposition NDC and described it as unnecessary. "What is it for?"

He said the President has already appointed a Coordinator and has started meeting all groups of people, "and I [Dr Nsiah Asare] know for sure that the President will meet all political leaders..., he is open to ideas, he is open to anybody who wants to talk to us, so it is not necessary to go and form another parallel group. This country is run by an Executive President.

He, therefore, questioned what the other group would be doing and with what resources.

"We should stop this politics, and politics and politics. It pains me, I become so much distressed when I see that everything in this country is politicized. If you have ideas, send it to the President, I don't believe that the opposition leaders cannot call the President or a Minister of Health," he added.

He said the President has formed an inter-ministerial committee because the disease cuts across and the actual response teams are in the districts and the regions and they are not NDC or NPP or PPP team members but they are professionals, it cuts across.

He insisted he knows some of the people in the NDC's list and he has been talking to them, therefore forming such a team is not "necessary" since even retired health professionals have all been contacted and ideas are being sought from them.

What the NDC has done is not done in any country, he reiterated adding that it is a problem which needs to be solved together.

Former President John Dramani Mahama on Sunday [March 22, 2020] said the NDC has submitted a proposal of a national action plan on combating the Coronavirus disease to the Speaker of Parliament.

Speaking at a church service to end a three-day prayer and fasting organised by the NDC, the former President indicated that as evidence of their commitment to assisting the government in the fight against the pandemic, a technical team has been put together to spearhead the affairs of the national action plan.

“I have also already announced that the National Democratic Congress (NDC) is committed to assisting government in this fight by availing all technical and logistical resources at our disposal. As evidence of our seriousness in that respect, we have assembled a technical team to guide our efforts and to lead the NDC's response to the evolving situation. The team is an assembly of experts from the many fields that will be required to implement a national action plan on COVID-19”.

“We have through our Minority Leader Honourable Haruna Iddrisu presented to the Rt. Hon. Speaker of Parliament what are the major points of our proposals and steps that may be taken to curb the spread of this plague and reinforce the readiness of our healthcare system, and to save as many lives as possible,” the former President said.

8. Mintah Akando- Ranking member on the parliamentary committee of Heath

The Deputy Minister of Health, Alexander Abban speaking in a radio interview with Accra based Joy FM on Monday evening said he was not aware that the NDC had reached out to the government formally but said he had read about it on social media.

"I will like to state clearly that we require the expertise of every Ghanaian, not necessarily giving ourselves tags as NDC expertise, NPP expertise or CPP or any other kind of nomenclature that we can give. I think that we should not try to bring in NDC, NPP to take partisan stance in this.

"If any individual has the goodwill to support, they do not need to put themselves together as a team from the NDC before, because the point is that, for now we have a government, every Ghanaian at this point is required to do their bit.

"Apart from that, each of those individuals with their own expertise in their field of endeavour is wholeheartedly welcome. In any case, about a week ago, private medical practitioners in Accra, I was surprised to see a whole lot of them, pledging their commitment to this fight, so we don't need this kind of tagging before they put their expertise, they are welcome as individuals as individuals but let us not create this for any partisan advancement or whatever it is," the Deputy Minister of Health said in the Joy FM radio interview.

Adding, he said the issue at hand was not necessary to be seen as an opportunity for a partisan points scoring or anything else, "because you as I [Abban] sit here in Accra working tirelessly for us to find a solution to the problem, in my constituency, I have had numerous calls to come back home because my political opponent is going round distributing Veronica buckets with soap and sanitizer with his picture and party emblems on it so what are you doing and all that, and so it gets to this point you realise that, sometimes people will want to make political capital out of it.