Chereponi defies heavy rains to give Bawumia a fitting reception 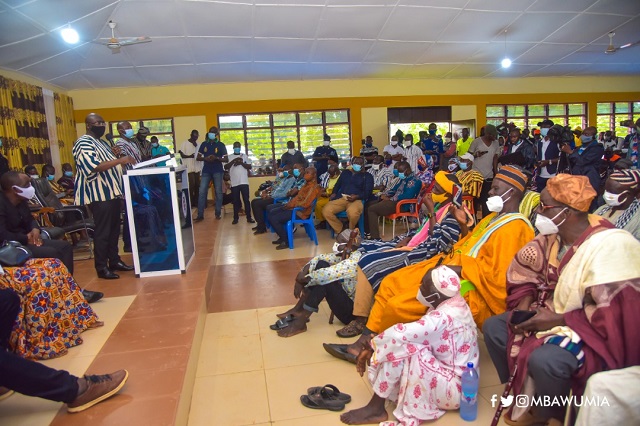 Vice President Dr. Mahamudu Bawumia's visit to Chereponi on Saturday was heralded with a heavy downpour, but enthusiastic constituents defied the rains to welcome him.

The Vice President who is on a working visit of the northern parts of the country, visited Chereponi on Saturday on the third day of his tour.

As the Vice President's entourage arrived, news of his arrival spread through town and scores of people defied the heavy rains and trooped out to welcome him.

Before the Vice President and his entourage proceeded to the venue for his interactions, he paid a courtesy call on the Paramount Chief of Chereponi Traditional Area, Nyanyame Kofi Malaba VIII.

The Paramount Chief commended Dr. Bawumia for his frequent visits to the area since becoming Vice President, as well as President Akufo-Addo for his flagship programmes, which he said are benefitting the poor.

The Paramount Chief was particularly grateful to the government for the Free SHS policy, as well as the One Village One Dam initiative, which he said have brought relief to farmers.

He also expressed appreciation to the government for bringing development to Chereponi, citing the water system in the area and the rehabilitation of roads in the area.

Dr. Bawumia who addressed identifiable groups inside a church auditorium but scores of people spontaneously trooped to the ground to catch a glimpse of him.

Dr. Bawumia said President Akufo-Addo has proven to be a leader who is for inclusive development through policies such as Free SHS, One Village One Dam, Planting for Food and Jobs, among others.

The Vice President urged them to reject former President Mahama's lure for a second chance because his track record of cancelling pro-poor programmes such as teacher and nursing trainee allowances as well as Arabic instructors allowance, is an indication that he cannot be trusted with the good policies initiated by President Akufo-Addo.

Dr. Bawumia stressed that Nana Akufo-Addo as a development leader, has brought development to Chereponi in just three-and-half years and listed a number of projects in various towns within the constituency.

He urged them to vote massively for President Akufo-Addo in December to continue with his good works.

As the Vice President's entourage set out to exit the town after the programme, scores of enthusiastic people on motorbikes and on foot, sang and escorted him.