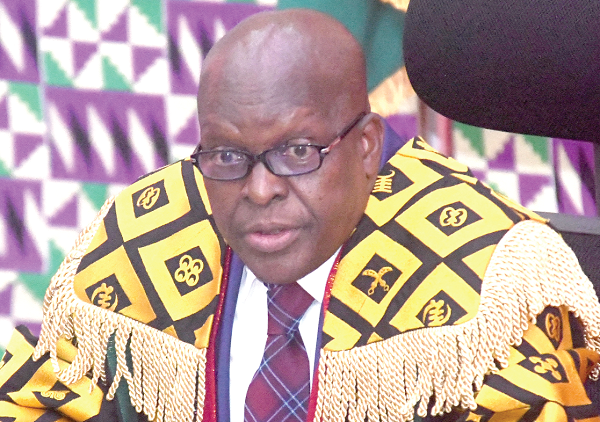 The Speaker of Parliament, Alban Sumana Kingsford Bagbin, yesterday apologised to eight National Democratic Members (NDC) Members of Parliament (MPs) who were wrongly marked absent in the Votes and Proceedings during the approval of the Electronic Transfer Levy Bill, 2021 last Tuesday.

He said while he was presiding, he personally saw and recognised that some of the members that had been marked absent were present and participated in the proceedings in the House.

“So, this is a grievous error; being the Speaker and being the one having the ultimate responsibility, I will take responsibility and apologise sincerely to members for this error,” he said.

Speaking on the floor of Parliament, Mr Bagbin directed that immediate steps be taken to correct the errors in the next Votes and Proceedings to accurately capture the names of all the eight affected MPs.

The Speaker made the apology after the Minority Chief Whip, Mr Mohammed-Mubarak Muntaka, had raised a strong objection over the accuracy of the Votes and Proceedings captured last Tuesday.

He said the document had mistakenly misreported the eight Minority MPs as being absent at the time the Electronic Transfer Levy Bill, 2021 was approved.

With the exception of the NDC MP for Assin North, Mr James Gyekye Quayson, Mr Muntaka said the affected MPs were present in the House.

He gave the names of the MPs as the MP for Zebilla, Mr Cletus Avoka; the MP for New Edubiase, Mr Abdul-Salam Adams; the MP for Afram Plains South, Mr Joseph Appiah Boateng; the MP for Amenfi East, Mr Nicholas Amankwa; the MP for Techiman North, Mrs Elizabeth Ofosu-Adjare and the MP for Sissala West, Mr Adams Mohammed Sukparu.

“The most unforgivable error that I call deliberate and not a mistake is to refuse to record that we walked out; what we expect from the Clerks at the table is fairness and accuracy,” he said.

“This is unfair, unjust and I think that the Clerk must sit up because knowing the day and the difficulty of that day, you should have been interested yourself, going through the Votes and Proceedings to make sure that everything was properly captured, he said.

The Minority Leader, Mr Haruna Iddrisu, said the inaccurate recording contained in the Votes and Proceedings against the NDC MPs had serious political consequences and ramification on the Minority Caucus, members and their constituents.

“Mr Speaker, I do not want to believe that this side of the House, for purpose of someone’s professional negligence, is being discriminated against because our walkout was too loud not to be recorded and not to be reported by the Clerk and Clerk at Table.

“Our walkout particularly on a major economic issue like E-levy has consequences on a long-standing Majority Leader like Honourable Cletus Avoka; how will the people of Zebilla perceive him?” he asked.

The Deputy Majority Leader, Mr Alexander Afenyo-Markin, conceded that the sentiments expressed by the Minority Chief Whip were legitimate.

He, however, said since the Clerks at Table could not defend themselves and rebut the allegation levelled against them on the floor of the House, the leadership must sit in conclave to thrash it out with the Speaker.