Boankra port to be ready 2024 : Minister of Transport assures 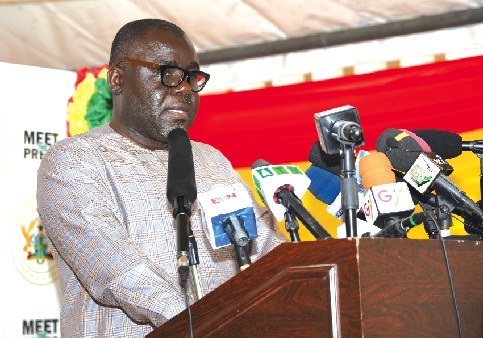 The Minister of Transport, Kwaku Ofori Asiamah, has assured Parliament that the Boankra Integrated Logistics Terminal project will be ready by the middle of 2024.

He told the House yesterday that 80 per cent of the construction period would be ready next year.

The project, which is expected to facilitate the transportation of goods from the ports to landlocked countries is being undertaken by the Ashanti Ports Services Limited (APSL), the concessionaire of the Boankra Integrated Logistics Terminal project.

Mr. Asiamah gave the promise on the floor of the House when he moved the motion for the approval of GH¢ 1.2 billion for his ministry.

The House subsequently approved the budget after a hot debate on the viability of the project.

The entire project is estimated to cost $330 million.

The Boankra project is contingent on the construction of a rail line between Tema and Boankra in the Ashanti Region.

The infrastructure is expected to link the ports of Tema and Takoradi to the inner parts of the country and the landlocked countries of Burkina Faso, Mali and Niger.

This is expected to be a free port that will combine unimodal and inter-modal operations aimed at easing congestion at the country's seaport thus facilitating the transit trade from Ghana and the landlocked neighbours.

Among others, the port is to help reduce transport cost of international cargo to importers and exporters from the middle and northern parts of Ghana, including the Sahel sub-region as well as increase exportation of produce such as cola nuts, shea-butter, cocoa and cocoa products, wood and wood products.