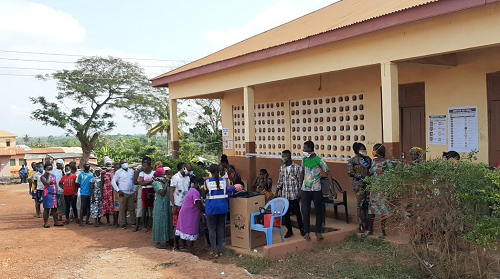 Voting in the Bekwai Municipality in the Ashanti region went on smoothly in Monday's elections.

There were however no security personnel in some polling stations Graphic Online visited since the police personnel who were stationed there had to go out to vote.

This is because many policemen in the Municipality were unable to take part in last week's special voting.

The Bekwai District Police Commander, Superintendent Ebenezer Benso, told Graphic Online in an interview that the shortage of the security personnel at some polling stations was due to the fact that some security personnel were unable to cast their vote on the special voting day and that such officers took part in Monday’s voting.

He said measures were instituted to ensure that as soon as the officers finished voting, they would be dispatched to the centres without security personnel.

Superintendent Benson said adequate measures were instituted to ensure that nobody fomented trouble in the area.

The Bekwai Director of the Electoral Commission, Mr Sadique Wahid, said the electoral process was successful.