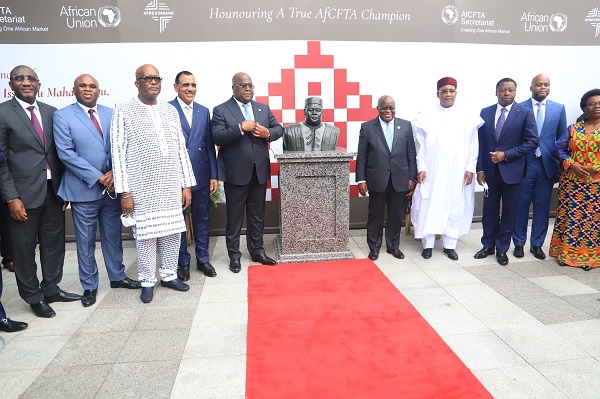 A magnificent bust of former President of Niger, Mr Issoufou Mahamadou has been unveiled in his honour by AU leaders, in Accra.

The bust is in recognition of his immense contributions, sacrifices and dedication to the realization of the African Continental Free Trade Area (AfCFTA).

Referred to by many as the Leader and Champion of the AfCFTA, the two time President of Niger who finished his second term this years was credited with his ability to attain the feat that had endeared him to many, especially African leaders.

At the ceremony to unveil the bust, located at the forecourt of the Africa Trade House in Accra were host President Nana Addo Dankwa Akufo-Addo; President of Togo, Mr Faure Essozimna Gnassingbé Eyadéma; President of Burkina Faso, Mr Roch Marc Christian Kaboré; the President of the Democratic Republic of Congo who is also the Chairman of the AU, Mr Felix Tshisekedi; and President of Niger, Mr Mohamed Bazoum.

President Akufo-Addo said Mr Mahamadou was assigned the duty of ensuring the transformation of the AfCFTA from a concept into a reality in 2017 by the 28th ordinary session of the Assembly of Heads of States and Government of the African Union.

“President Issoufou Mahamadou from the onset understood that the successful execution of his mandate will have a ripple effect on the lives of all Africans, for both small and medium scale enterprises and guarantee ready market for women in trade and other entrepreneurs”, he added.

He said he was responsible for ensuring that a host country was selected in a fair and transparent manner and said the people of Ghana are grateful for the Africa Union under his guidance to be selected as the host nation.

President Akufo-Addo said Mr Mahamadou advocated for the broadening and inclusivity of the AfCFTA by including protocol for women and youth in trade and helped mobilise hundreds of millions of dollars in support of AfCFTA negotiations and implementation.

He reiterated what he said about a year ago at the handing over of the AfCFTA secretariat in Accra that “no one has done more in ensuring the coming into effect of the AfCFTA than Mr Mahamadou” and that posterity would reward his name.

In a statement, Secretary-General of the AfCFTA Secretariat, Mr Wamkele MENE noted that without the singular contribution of former President Issoufou Mahamadou, to the AfCFTA, it is doubtful that we would have achieved the progress that we celebrate today.

He recalled when in January, 2017, President Mahamadou was assigned by the Assembly of Heads of States & Government, the task of being a Champion and Leader of the AfCFTA.

He said many doubted that in less than 5 years, Africa would organize herself into a viable market of 1.3 billion people, with a combined GDP that is projected to be close to US$8 trillion by the year 2035.

Under the guidance and leadership of President Mahamadou as the Champion of the AfCFTA, Africa confounded critiques: to date, 54 countries have signed the agreement and 40 countries have ratified it, making this the fastest ratification in the history of the African Union.

His decision to step down after two terms meant Niger had its first democratic transition between elected leaders since it became independent from France more than 60 years ago.