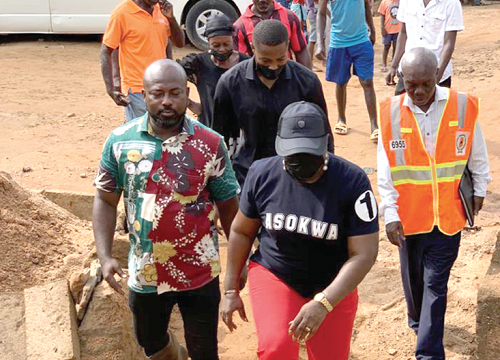 The New Patriotic Party (NPP) Member of Parliament (MP) for Asokwa, Ms Patricia Appiagyei, has toured some of the areas that got flooded during last week's two-day downpour in Kumasi.

The rainfall on Wednesday and Thursday resulted in many areas getting flooded as a result of choked drains.

Some of the areas she visited were Asokwa Extension, Agogo Market, Old Asokwa and Kaase.

She was accompanied by the Municipal National Disaster Management Organisation (NADMO) Officer, Mr Eric Nana Akosah, and the Municipal Engineer, Mr Emmanuel Tetteh, as well as the assembly members for the various electoral areas.

Other members of her entourage were some executive members from the Asokwa NPP branch including the constituency chairman, Mr Benjamain Fosu Nkrumah and Papa Yaw Asare Bediako John, the constituency secretary.

At Asokwa Extension, the MP was awed by the extent of the damage caused by the floods to some of structures which she believed were sited on watercourses.

She called on the Municipal Engineering Department to verify the building permits of the houses in the area.

At the Agogo Market arena, Ms Appiagyei assured traders that a new place would be found for them to relocate before the demolition of the market to pave the way for a modern and more befitting market for them.

The MP later visited the New Bethel Presbyterian Primary JHS where she inspected ongoing works on the new classroom blocks.

When completed, the classroom blocks would help to deal with the congestion currently facing the school.

She urged the pupils to study hard and to become useful citizens in future.

She also encouraged them to be disciplined and remain focused in their aspirations.