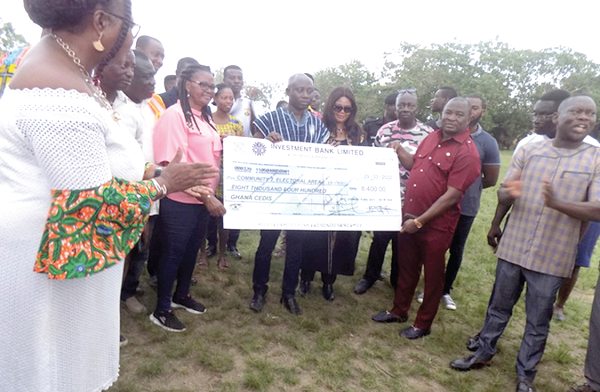 The New Patriotic Party (NPP) Member of Parliament (MP) for Akyem Oda, Mr Alexander Akwasi Acquah, has disbursed GH¢151,200 to the 18 electoral areas in his constituency to finance development projects of their choice.

Each electoral area received GH¢8,400, which was the MP’s share of the District Assemblies Common Fund (DACF) for 2021.

Last Friday, Mr Acquah cut sods for the construction of various development projects for six electoral areas in the Oda township, during which he presented cheques to the assembly members to fund the projects.

The beneficiary electoral areas of the first phase of the programme were Oda Community 2, Srodae, Towobotom, Oda PWD Camp, Aseneye and Kyeremem Number 2, and the projects being undertaken included volleyball/tennis/basketball court, provision of potable water, drainage system, culverts and rehabilitation of school blocks.

At the ceremony, Mr Acquah said the gesture was in fulfilment of his campaign promise of distributing his share of the DACF equitably among the electoral areas in the constituency to undertake development projects of their choice to raise the quality of life of the people if given the chance.

He advised the people of the beneficiary communities to utilise the funds for the intended purpose and also offer communal labour on the projects to reduce cost and to complete them on schedule.

The MP promised to monitor the progress of the projects.

The Municipal Chief Executive (MCE) for Birim Central, Ms Victoria Adu, commended Mr Acquah for his commitment to the development of the municipality and urged him to sustain the gesture.

She stated that the MP’s decision to use his share of the common fund to finance development projects in the electoral areas did not breach the district assemblies’ bye-laws and urged other legislators to take a cue from Mr Acquah.

The Presiding Member of the Birim Central Municipal Assembly, Mr Castro Asumadu Addae, who is also the Assembly Member for Oda Community 2 Electoral Area, on behalf of the six beneficiary electoral areas, thanked the MP for the gesture and promised to complete all the projects on schedule.