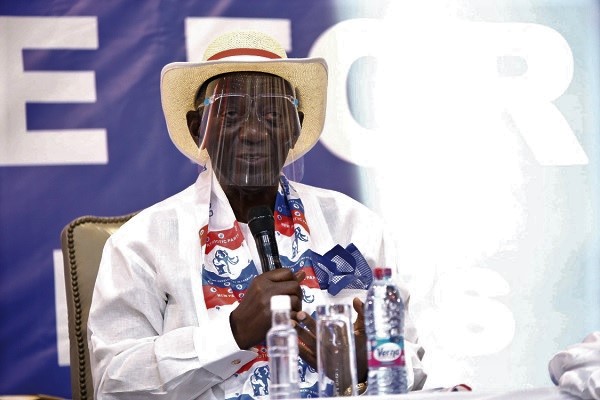 The successes, he said, had been reinforced by the telepathic relationship between the two gentlemen and, therefore, urged Ghanaians not to allow pettiness to divert their focus from the vision and the course that was being charted by the current administration.

Speaking at the extraordinary meeting of the National Council of the New Patriotic Party (NPP) in Accra last Saturday, the former President said the current leadership did not talk but rather did the work.

He said it was very difficult for political leadership to combine such vision and articulation as President Akufo-Addo and his vice had done and added that their partnership was appreciated by both the grass roots and those in higher authority.

The meeting was in two parts. The first session was a consultation with the council while the second session witnessed the acclamation of the flag- bearer of the party and the nomination and endorsement of his running mate.

The former President was of the belief that the current leadership of the NPP would lead the party to victory to bring Ghana the transformation the citizens yearned for.

“It is very difficult for political leadership to combine such vision and articulation as the two of them do. I always say our party is destined to lead in the transformation of the country and the party keeps on giving the leadership that will do the work for Ghana, and it is a typical example even in the midst of COVID-19.”

Mr Kufuor said “even though he did not subscribe to perfection by humans, the affairs by any leader who could achieve something like 70 and 80 per cent was almost like a saint.”

That, he said, was what the current leadership of the NPP and Ghana had been working towards to realise.

He was, therefore, hopeful that the people of Ghana would give President Akufo-Addo the mandate again to continue with the work that he started so ably.

Former President Kufuor who expressed admiration for the manner in which Vice-President Bawumia articulated the inclusive social interventions said that was the vision and the philosophy the nation aspired for.

“People ask whether this party is leftist or socialist; we are not, but I tell you we respect capitalism with conscience. Capitalism that is human and this is why we fix the safety net below which we do not allow any human to fall under and that is the leadership we have today. This is what the two of them articulate so competently in all their term of office and within three and half years see what they have already achieved,” he told the gathering.

He said it was the ticket that promised and delivered and one which all Ghanaians could trust without hesitation, adding that from the qualities and exceptional consistency exhibited by President Akufo-Addo and the confidence he had reposed in Dr Bawumia, it was clear that he had an exceptional quality which the entire party must acknowledge.

“Now the name Bawumia is a household name, the name when he does not even speak creates more problems for our opponents. When he speaks, that is worse for them. I can say without any shred of doubt that Dr Bawumia is one of the most successful Vice-Presidents of our country in all time,” Mr Boadu said.