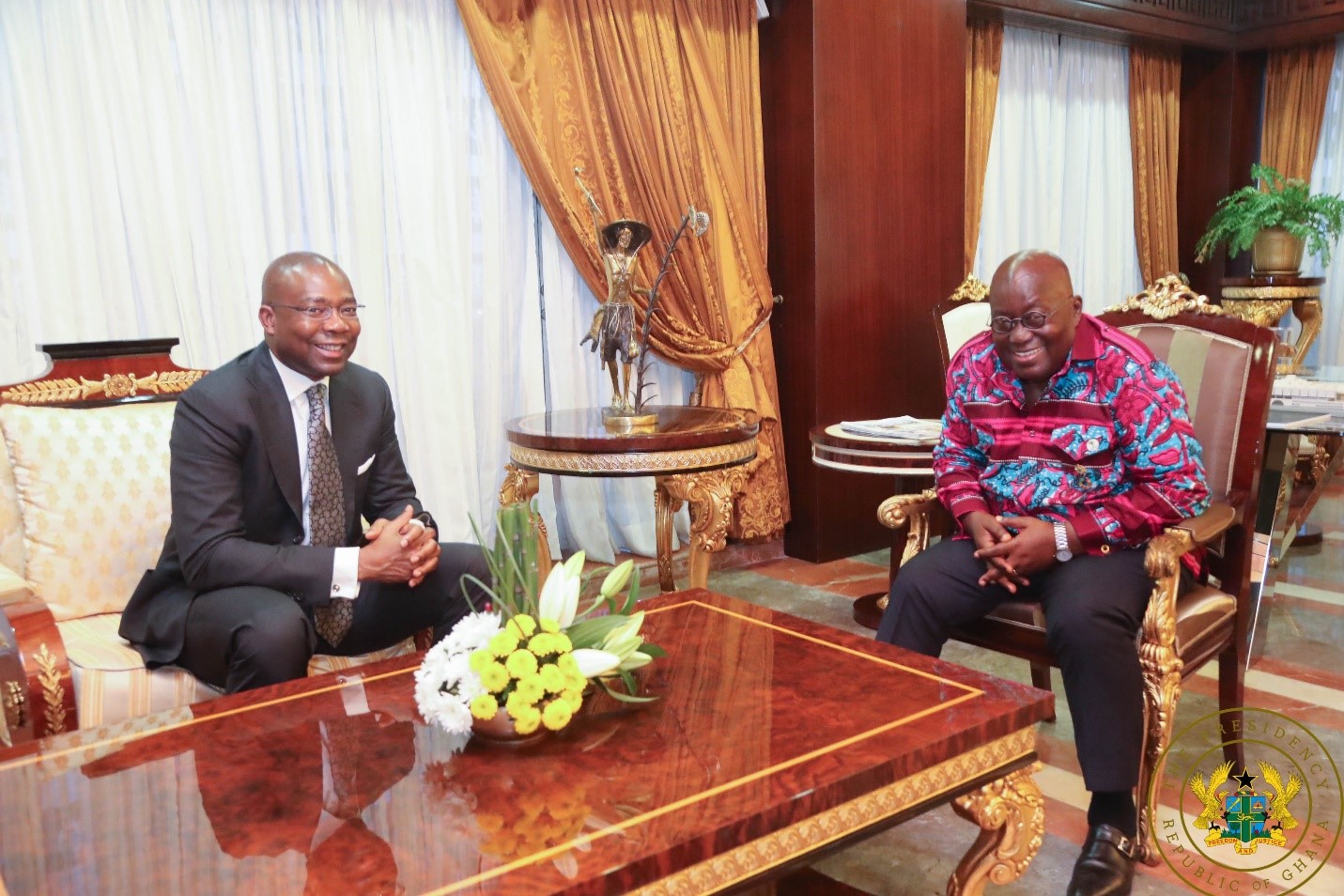 President Akufo-Addo in a chat with Mr. Aigboje Aig-Imoukhuede, Founder and Chairman of the Africa Initiative for Governance Follow @Graphicgh

Founder and Chairman of the Africa Initiative for Governance (AIG), Mr. Aigboje Aig-Imoukhuede, has paid a courtesy call on President Akufo-Addo to brief him on AIG's good governance promotion activities.

The not-for-profit Foundation aims to inspire the transformation of Africa's public sector, and works with governments, academic institutions and other partners to improve governance and promote the emergence of a high-performing public sector.

The visit to Ghana was part of activities to strengthen AIG's work and impact in the country and assess opportunities for collaboration in the area of capacity building for public servants.

A statement issued by the Foundation in Accra on Monday, said as part of his visit, Mr. Aig-Imoukhuede also met with Justice Mrs. Georgina Wood (Retired), immediate past Chief Justice of Ghana, and current Africa Initiative for Governance (AIG) Fellow, as well as on also Minister of Finance, Mr. Ken Ofori-Atta, who is a member of the AIG Panel of Advisors.

In October 2017, Justice Mrs. Wood (Retired) was announced the 2017-2018 AIG Visiting Fellow of Practice at the Blavatnik School of Government, University of Oxford. The AIG Fellowship is awarded each year to an individual from West Africa who has demonstrated evidence of outstanding contribution to the public good, through exemplary leadership in public service.

The stay at Oxford provides AIG Fellows the opportunity to further develop their understanding of specific policy issues and solutions, and reflect on practices in other countries. Following the Fellowship period at the School, AIG Fellows will help drive AIG's vision for transformational public-sector leadership across the African continent.

In their discussions, Mr. Aig-Imoukhuede and Justice Mrs. Wood (Retired) restated their shared visions for building the capacity of public servants and committed to collaborating in this regard for the strengthening and development of Ghana's public sector.

As part of her AIG Fellow appointment, Justice Mrs. Wood (Retired) will also serve as a mentor to AIG Scholars. In June 2016, AIG signed a partnership with the Blavatnik School of Government at the University of Oxford, under which AIG will fund five scholarships every year to talented, young West Africans from all backgrounds, for graduate study at the Blavatnik School over a five-year period.

The inaugural AIG Scholars were announced in August 2017. The selection process for the 2018 - 2019 AIG Scholars is currently underway.

The statement touted AIG's pioneering initiative as bringing proven private sector innovation, leadership and funding to the public sector in a private-public partnership that seeks to attract, inspire and support future leaders of Africa's public sector.