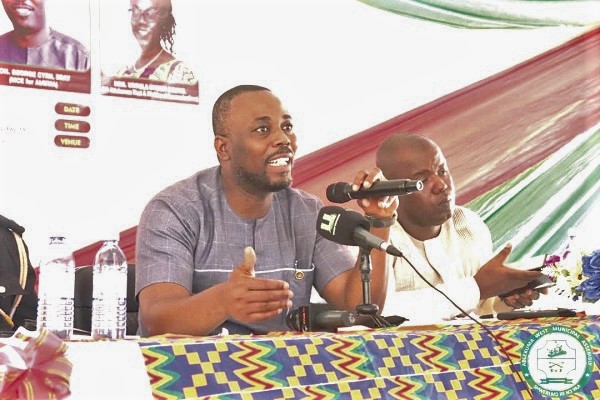 The Ablekuma West Municipal Assembly (AbWMA) will be conducting a demolition exercise on all structures that have been put up around the Jatapko river banks and the sea defence area at Glefe, a suburb within the municipality.

Announcing this at the assembly’s Meet the Press series, the Municipal Chief Executive (MCE), Mr George Cyril Bray, explained that the lands on which those structures had been put up had been encroached upon, saying the demolition was necessary to prevent any unforeseen circumstances such as flooding.

The event was to afford the MCE the opportunity to give an account of his stewardship and state the measures put in place to develop the municipality.

At the event, the MCE presented projects being undertaken under the government’s flagship programmes on sanitation, education, health, security and infrastructure.

Touching on sanitation, Mr Bray explained that the municipality, particularly the Glefe enclave, was faced with the problem of open defecation, saying the assembly was putting measures in place to address the menace.

He explained that they had through the Greater Accra Metropolitan Area Sanitation and Water (GAMA-SWP) project constructed 150 household toilets to serve a number of residents.

The MCE said the assembly was collaborating with the divisional police to ensure that community members were safe and lived in peace in the municipality.

He added that another police station was under construction at Mpoase while a piece of land at Dansoman SSNIT Flats had also been cleared and was ready for construction.

According to Mr Bray, the assembly had awarded more than 40 students with scholarships to study in various tertiary institutions across the country, adding that they had also distributed 500 dual desks to seven public schools in the assembly and paid registration fees for 14 second-cycle institution students.

He added that a “Wolo” e-learning project had also been launched to complement the double-track system, aimed at engaging the students while on vacation.