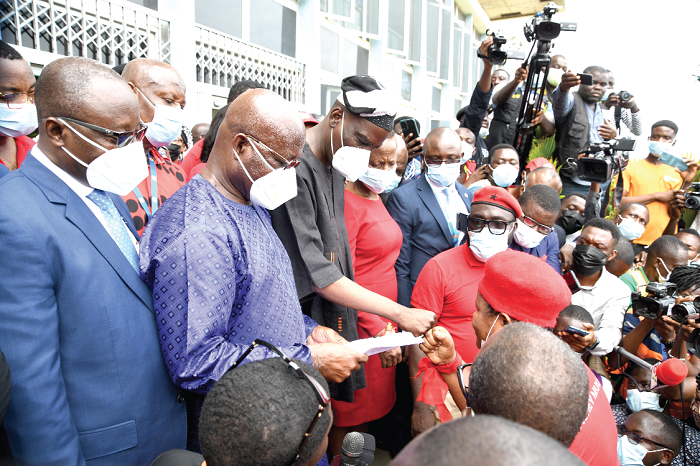 Ms Ruth Seddoh, Deputy National Youth Organiser of the NDC, presenting a copy of the petition to Mr Osei Kyei-Mensah-Bonsu (2nd left), Majorty Leader of Parliament. Behind him is Mr Haruna Iddrisu

Parliament has deferred the referral of a petition by the youth wing of the National Democratic Congress (NDC) to two parliamentary committees to investigate.

The House is holding on to the petition until the Speaker of Parliament Mr Alban Sumana Kingsford Bagbin, returns from a trip to Nigeria to act on it.

The decision to task the Constitutional, Legal and Parliamentary Affairs and the Defence and Interior committees to undertake the investigation came after the leadership of the House, led by the Majority Leader, Mr Osei Kyei-Mensah-Bonsu, and the Minority Leader, Mr Haruna Iddrisu, had both requested the Speaker to refer the petition they jointly received from the leaders of the demonstrators in Parliament to the two committees.

However, the First Deputy Speaker, Mr Joseph Osei-Owusu, who was presiding, deferred the referral of the petition to the two committees until Mr Bagbin returns from the trip.

Briefing the House on the petition, Mr Kyei-Mensah-Bonsu said the NDC youth wing intended to present the petition to the Speaker but unfortunately, Mr Bagbin had travelled to Nigeria in response to an invitation from his counterpart in that country.

He noted that freedom of association, demonstration and speech were guaranteed by the Constitution.

He said reports indicated that the NDC youth wing demonstration was about the right to life and protection of the citizens of the country, which he said could not be “contentious”.

Mr Kyei-Mensah-Bonsu said the presentation of the petition by the demonstrators to Parliament was a demonstration of Ghana’s functional democracy and the need to correct the “processes and procedures to ensure that we straighten living within the remit of democratic rule”.

Contributing, Mr Iddrisu said he did not intend to prejudice any work that the House would do under the guidance of the Speaker.

He said although the demonstration by the NDC youth wing was peaceful, it drew attention to the hardship prevailing in the country, as well as infractions of “excesses of men in uniform of security agencies”.

“Parliament remains a guardian of the fundamental rights and freedoms of citizens; we have a duty to protect and preserve our Constitution, safeguard our democracy and we have a responsibility to ensure that Ghana remains a peaceful and stable country,” he said.