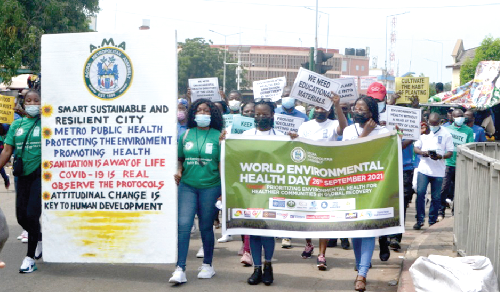 This year’s World Environmental Health Day (WEHD) has been commemorated in Accra, with a call on the government to make environmental health an integral part of the national development agenda.

The Director of the Public Health Department of the Accra Metropolitan Assembly, Ms. Florence Kuukyi, who made the call, also advocated the establishment of a directorate responsible for the welfare of environmental health practitioners to enable them to deliver on their mandate effectively.

She was speaking after an awareness walk through the principal streets of Accra yesterday as part of activities to commemorate the day.

The UN General Assembly, in 2011, declared September 26, every year as WEHD to promote and increase awareness of the significance of the day.

This year’s commemoration was on the theme: “Prioritising environmental health for healthier communities in the global recovery”.

By 8 a.m. yesterday, officials of the AMA’s Health Directorate, institutions and other stakeholders had gathered at the old AMA office to begin the awareness- creation walk.

Dressed in their branded attire, the participants walked through some principal streets of the metropolis, with some of them carrying placards which read: “Do not dump refuse into drains”, “Cultivate the habit of planting trees”, “We need educational materials”, “Mr. President, we are ready to work with you to achieve the agenda to make Accra the cleanest city, please support”, among others.

According to Ms. Kuukyi, environmental health had not received the necessary attention over the years to enable practitioners to discharge their duties well, adding that a healthy environment was synonymous to a healthy economy for accelerated development.

The Greater Accra Regional Chairman of the Ghana Environmental Health Officers Association (GEHOA), Mr. Isaac Wakah, called for the implementation of appropriate policies to deal with the sanitation challenges in the country.

He also called for the harmonisation of environmental health practice in the country, where roles would be spelt out to practitioners.

For her part, the President of the Greater Accra Market Women Association, Ms. Mercy Naa Afrowa Needjan, commended environmental health officers for their role in ensuring sanity in the cities over the years.

She entreated the government to prioritise the needs of environmental health officers, saying their work was crucial to national development.

Ms. Needjan further urged the public, especially market women, to support the work of environmental health officers in the discharge of their duties.