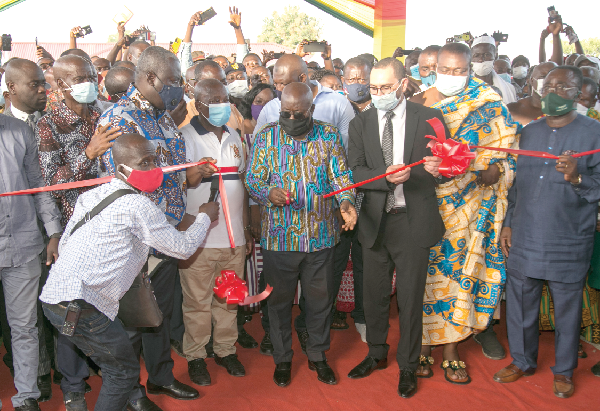 The President, Nana Addo Dankwa Akufo-Addo, has inaugurated the Tain District Hospital at Nsawkaw in the Bono Region to usher locals into the safety of advanced medical care.

The 60-bed facility, worth $36.6 million, is expected to serve up to 10,000 people in the surrounding communities.

With four operating theatres covering different specialties, a radiology department equipped with ultrasound, echocardiography and x-ray machines and a laboratory, it is also to serve as a referral centre for cases from the non-sophisticated health care facilities in the area.

The district hospital also has a dental clinic, as well as cardiology, ophthalmology, pediatric, gynaecology, and orthopaedic departments for outpatient services, and 15 units of staff accommodation.

It has 1.2 kilometres of internal roads and 600 metres of covered walkways.

The inauguration of the Tain District Hospital brings to four the number of hospital projects completed by Euroget De-Invest out of nine awarded to the Egyptian investment company.

The ceremony — graced by traditional leaders, political appointees, health workers, faithful of the ruling New Patriotic Party (NPP), among others — was a celebration of what had been a rarity and a luxury for the modest environs of Nsawkaw.

It was preceded by the President's tour of the facility as he was ushered around some of the modern installations by the Vice-Chairman of the Euroget Group, Mr Emad Deraz, with an excited entourage of traditional rulers, ministers of state and other political appointees in tow.

President Akufo-Addo said the government would ensure that every part of the country received a fair share of the state's resources through a fair distribution of infrastructure and other tangible and non-tangible projects.

He said Nsawkaw, like other parts of the country, had contributed to national development through particularly agricultural production, and the people were, therefore, deserving of a hospital of that standard.

The President said he was impressed with the cooperation between the government, through its relevant agencies, and the contractor, Euroget De-Invest, stressing that the rapport had yielded tangible deliveries of the expected standards.

He charged the hospital management and the Ghana Health Service to develop a maintenance regime that would sustain and prolong the lifespan of the facilities and installations at the hospital.

The Minister of Health, Mr Kwaku Agyemang-Manu, said health remained a priority sector for the government, a commitment that would be demonstrated through similar provisions across the country.

He urged the people to observe all relevant protocols to avoid COVID-19 and the projected second wave of the pandemic in the country in order not to undermine the government's handling of the situation.

The Omanhene of Nsawkaw Traditional Area, Daasebre Okogyeaman Duodu Ampem II, expressed gratitude to the government for the hospital, saying it was an example of development in the area.

He, however, appealed to the government to construct a market for the people and to absorb the youth who offered labour services during the construction of the hospital into full-time employment.

Euroget Group Vice-Chairman, Mr Deraz, thanked the government for the support Euroget De-Invest had received in its work in the country.

Mr Emad Deraz — standing in for his father, the Chairman and Chief Executive Officer of Euroget Group, Dr Said Deraz — said a fifth hospital was ready, and invited the President to the inauguration of the Twifo Praso District Hospital in the Central Region at the President's earliest convenience.

China Railway No. 5 Engineering Company Ghana Limited and Safetech Company Limited were among the sub-contactors for the project.

Euroget De-Invest will maintain visible presence at the hospital to provide remedial works on building structures during the defects liability period, warranty maintenance of medical equipment for 12 months after handing over, and post-warranty maintenance of medical equipment for a further 24 months when the warranty period expires.