Must one worry about sleep paralysis? 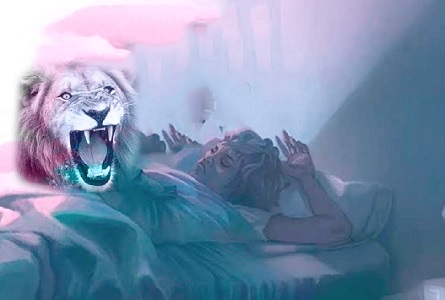 A lion chasing a sleeper in a sleep paralysis Follow @Graphicgh

Sleep paralysis is a type of parasomnia inherent in human nature globally. Parasomnias are abnormal behaviours during sleep.

Therefore, sleep paralysis refers to a feeling of a person being conscious during sleep but unable to move or speak.

It occurs when a person passes between the stages of wakefulness and sleep. It is equally a phenomenon during which a person feels a presence of a supernatural malevolent-being which immobilises the person sleeping as if the malevolent figure is sitting on the chest or any other part of the sleeper’s body making breathing and waking up difficult.

During a sleep paralysis, the sleeper is usually unable to move or speak for few seconds or minutes, but rare cases can last for an hour or more ending with panic symptoms. It may also make a person feel pressure or a sense of choking or suffocation.

Originally, sleep paralysis was called nightmare worldwide and its occurrence was attributed to a supernatural creature called the night hag or the old hag.

As indicated earlier, various cultures have different names for sleep paralysis and there are folklore or cultural causations attributed to the occurrence.

In Ghana, various ethnic groups and traditional areas refer to it differently. For instance, the people of Mepe traditional area refer to sleep paralysis as le ame le ᶑimee (the unconscious arrester), while among the Akans, it is called amuntum akye me (am arrested by an evil spirit).

In Fiji for example, it is called kana tevoro (eaten by a demon), Yoruba people of Nigeria call it “ogun oru” (nocturnal warfare). Ja-thoom (what sits heavily on something) is the term for it in the Arab culture while Egyptians refer to the experience as the haunting of an African queen’s ghost.

Scientifically, sleep paralysis refers to a temporary inability of a sleeper to move or speak, either when falling asleep or when waking.

Insomnia or disrupted sleeping patterns due to shift work or jet lag can also lead to sleep paralysis.

Substance abuse, bipolar disorder and other mental conditions can equally lead to sleep paralysis. Research shows that sleep paralysis may affect four out of 10 people, averagely.

Sleep paralysis is best diagnosed by the individual suffering from it, hence it is self-diagnosable. It involves episodes of not being able to speak or moving when waking or falling asleep and it can be frightening especially when the sleeper sees a figure or a person struggling with the former.

Specifically, a person experiencing sleep paralysis may feel awake but cannot move his or her limbs, speak or open his or her eyes.

Sometimes, the person may feel that he or she is shouting for help but no nearby person hears him or her.

Another symptom is that the sleeper feels someone, or an attacker is in his or her room and trying to push the sleeper from bed or to strangulate him or her. Such occurrences make sleep paralysis frightening.

The main treatment for sleep paralysis is improved sleep habits or sleep hygiene including but not limited to going to bed same time every night, ensuring that one sleeps in a comfortable sleep environment devoid of distractions and avoiding edibles containing caffeine immediately before going to sleep.

Also, the affected person must try to sleep regularly at least 6 to 8 hours daily and exercise regularly but not exercising close to bedtime.

Some experts advise that people who suffer from recurrent sleep paralysis should avoid eating heavy meals, smoking or drinking alcohol shortly before going to bed and they should not lie on their backs while in bed as this can lead to recurrence of the phenomenon.

However, one may consult a physician for advice, or for treatment of an underlying condition that triggers the sleep paralysis.

For most people, sleep paralysis is not a problem since it is classified as a benign condition, and it does not happen frequently enough to cause a significant health problem.

It is a benign condition because it is not that dangerous or serious. Said differently, sleep paralysis can be scary, it is harmless and most people get it only few times in their lifetimes.

Even though sleep paralysis does not pose any serious health problem, some people experience more recurrent or bothersome episodes of the phenomenon and thus become distressed. Such people tend to fear going to sleep due to possible recurrence and they feel tired all the time due to lack of sleep.

It is obvious to this end that sleep paralysis may look scary but it is not that medically harmful beyond the fear it creates.

In case the phenomenon becomes a routine occurrence, you may see a doctor to treat any underlying conditions.

It is also worth reiterating that the scientific explanations of the causes of sleep paralysis point to specific solutions rather than the age-old supernatural natural causes across the globe and the corresponding solutions.

Even if it is caused by a demon or deity, God dispelled our fears in Isaiah 41:10 when He said, “Fear not, for I am with you; do not be dismayed, for I am your God…I will uphold you with my righteous right hand.”

The writer is a health service administrator. This email address is being protected from spambots. You need JavaScript enabled to view it.