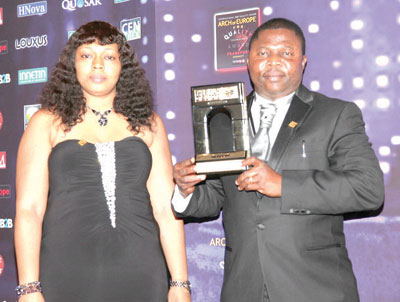 A Ghanaian medical officer and plant medicine specialist, Dr De-Gaulle Moses Dogbatsey, has been acknowledged internationally for his outstanding feat in finding a treatment for prostate cancer.

Dr Dogbatsey, the Founder of the Medi-Moses Prostrate Centre at the Adenta Old Barrier in Accra was honoured with the IAE International Arch of Europe Quality Award (Gold Category) during an international awards ceremony held in Frankfurt, Germany, recently.

The ceremony was attended by representatives from 178 countries with outstanding credentials within the business and diplomatic communities.


The essence of the award was a symbol of commitment to leadership, technology and innovation, making the recipient a model for others.

In 2010, the Medi-Moses Prostate Centre received the Merit Award from the West Africa Nobles Forum in recognition of its excellent performance as the leading prostate enlargement treatment centre in West Africa.

According to Dr Dogbatsey, a trained medical doctor from the School of Medical Sciences of the Kwame Nkrumah University of Science and Technology (KNUST) in Kumasi, he came up with a specially formulated 100 per cent food supplement called Prostacure used for improving urinary flow in men with benign prostrate hyperplasia (BPH).

He explained that the prospective study carried out in 7,000 patients aged between 40 and 70 with varying degrees of enlarged prostate gland over a period of four years showed complete improvement in their BPH symptoms within two to eight weeks.

The herbal treatment using Prostacure led to a remarkable improvement in symptoms of BPH, such as straining or difficult urination, incomplete emptying of the bladder, frequent urge to urinate, hesitancy, intermittence or interruption in urine flow, weak stream of urinary flow and frequent urination in the night.

The most novel finding was the drastic reduction in the size and weight of the prostate gland to the normal weight of 40 grammes and below within two to eight weeks of treatment using Prostacure.

There was also enhanced libido and sexual function after treatment.

This is especially good news for men who have tried conventional therapies for BPH and experienced a decline in sex drive and performance accordingly.

According to Dr Dogbatsey, a former Head of the Centre for Scientific Research into Plant Medicine at Mampong  Akuapem (Clinical Research Department), orthodox treatment of BPH was not effective and could only be corrected through surgery, which came with a lot of complications and the possibility of patients losing their lives.

He said as a result of the efficacy of the herbal formulation, people came from all over the world, including the UK, the US, Canada, among other countries, to his facility for treatment.