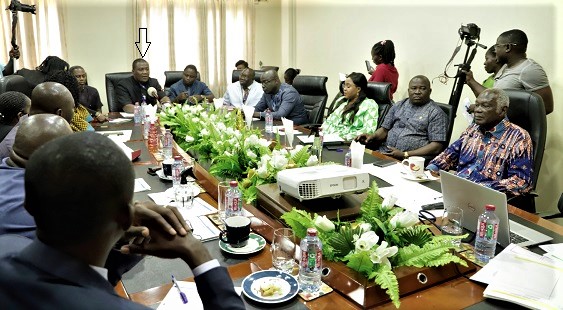 The Chairman of the Parliamentary Select Committee on Health, Dr Nana Ayew Afriyie, has urged politicians and influential people in society to desist from interfering in the operations of the Medical and Dental Council Ghana in ensuring best practices among practitioners and dealing with quark doctors.

He said if a doctor’s attitude fell foul of rules and regulations governing the profession, politicians must not interfere with the system put in place to achieve strong regulatory practices.

Dr Afriyie said this when members of the Parliamentary Select Committee on Health paid a working visit to the Council as part of a three-week tour of agencies under the health sector.

Other agencies the Select Committee intended to visit include the Food and Drugs Authority and the National Health Insurance Authority.

The meeting was held behind closed doors and briefing journalists later, Dr Afriyie said it came up during discussions that some of the challenges the council was faced with had to do with quark doctors and interference from politicians, family members and influential people.

On quark doctors, he said, there were a lot of those miscreants whose activities and practices were detrimental to public health stressing that “we face financial constraints in dealing with this problem”.

In view of that, he pointed out that, the continuous capping of the Council was not in the interest of the public and that of good practice.

He pointed out that the Council needed to have full resources available to execute its mandate adding that, the committee would pick the issue of capping up in the form of a private member motion on the floor of Parliament.

The council is required to submit 34 per cent of whatever money it generated to the presidency and that is what the capping is.

Contributing to the discussion, the Ranking Member on Health, Kwabena Mintah Akandoh, described the capping issue as a very serious matter pointing out that, it did not make sense for the government to be siphoning money from institutions that it must rather invest in.

“The health sector is a very sensitive one that any inefficiency may lead to loss of lives. If there is anything for the government to be highly interested in, it should be the health sector,” he said.

He said the attention of the committee had been drawn to the fact that the Legislative Instrument the Council was currently working with needed amendment and called on the sector ministry to raise the issue in Parliament to enable the committee to expedite action on it.

In his remarks, the Chairman of the Medical and Dental Council, Prof. Paul Kwame Nyame, commended the committee for the visit and said it was the first of its kind by the Select Committee to the Council.