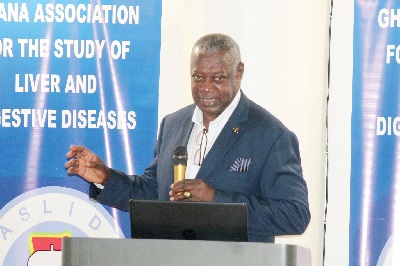 A former Director-General of the Ghana Health Service (GHS) — Prof. Agyeman Badu Akosa, has called on physicians to collaborate with farmer groups to educate farmers on the harmful effects of the pesticides and herbicides they apply in the food production chain.

He explained that most farmers did not know the effect some of those chemicals they apply on their farms had on humans, and it was incumbent on doctors to educate the farmers to use alternatives that were not poisonous.

“We wait till people fall sick to come to us but in our work there is a part called preventive medicine.

“So it should be possible for physicians to begin to talk to farmers — how do you produce your food? How do you fertilise the soil? Do you know that what you are using can also enter the food chain and affect people,” he said.

Prof. Akosa. made the call at the opening of the Seventh Annual General and Scientific Meeting of the Ghana Association for the Study of Liver and Digestive Diseases (GASLIDD).

He spoke on the theme, “Collaborative strategies to fight common digestive disorders”.

Founded in 2011 and launched in 2014, GASLIDD is a Ghanaian think tank in the field of gastroenterology. It has engaged in public education, training of fellows, research and advocacy in Ghana and beyond.

Prof. Akosa pointed out that there was so much happening outside of their profession as doctors, and these included how farmers were producing the food they grew; the chemicals they spray on the soil and the food adding that, some of these have effects on the stomach when they were consumed and that was why such collaborative education with the farmers was necessary.

“So it is important that if we are collaborating with our fellow doctors, we should collaborate with farmer groups too, talk to them don’t use this, you can use this, this is a better substitute and more friendly to human beings and at the end of the day we will get better food,” he explained.

Many liver and digestive diseases

The President of GASLIDD, Prof. Yaw Asante Awuku, in an interview said, there were so many people suffering from liver and digestive diseases in the country, and depending on one’s age and risk, they should go for screening to enable them to know whether they were healthy or not.

“At a certain age onwards, you need to walk to the hospital and demand for liver test even if you are not sick. However, if you already have symptoms such as your eyes are yellow because of the liver, having diarrhoea because of the digestive system, then of course that one you don’t have an option, you have to go to the hospital.

But the best is that when you are not sick go in and have yourself checked,” he said.

Earlier in an address, Prof. Awuku said the theme for the meeting was a call to them as physicians to fight common digestive disorders using all human and technical resources globally.

He said GASLIDD would continue to grow and impact Ghana and the world’s population positively.