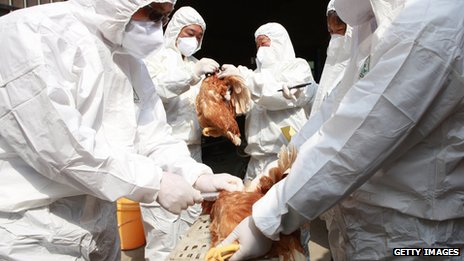 The outbreak of a new type of bird flu in China poses a "serious threat" to human health, but it is still too soon to predict how far it will spread, experts have said.

Of the 126 people known to be infected so far, 24 have died, with many more still severely ill in hospital.

The H7N9 virus has not, however, yet proved able to spread between people - which limits its global threat.

The threat should be "treated calmly, but seriously", researchers advised.

There is concern over both the pace and severity of the outbreak.


There has been a relatively high number of known infections since the first case was detected in April.

Prof John McCauley, the director of a World Health Organization (WHO) collaborating centre in the UK, said: "It is unusual to get these numbers."

Of those infected, a fifth died, a fifth recovered and the rest are still ill. The infection results in severe pneumonia and even blood poisoning and organ failure.

"The WHO considers this a serious threat," said Prof McCauley, "but we don't know at this stage whether this is going to spread from human to human."

So far nearly all cases have been traced back to contact with poultry. If the virus adapts to spread readily between people it will pose a much greater threat and scientists warn that the virus is mutating rapidly.

The last major bird flu, H5N1, made the jump to people in 1997 and killed more than three hundred people - yet, it is still unable to spread between humans.

Predicting which viruses will become deadly on a global scale is impossible.

Prof Jeremy Farrar, a leading expert in bird flu and the director-elect of one of the world's largest research charities, the Wellcome Trust, said H7N9 needed to be taken seriously.

"Whenever an influenza virus jumps across from its normal host in bird populations into humans it is a cause for concern," he said.

Often in pandemics older people have some immunity as they have lived longer and have been exposed to similar viruses before.

However, in this outbreak the ages of those infected ranges from two to 81.

Prof Farrar said: "That suggests there truly is no immunity across all ages, and that as humans we have not seen this virus before.

"The response has been calm and measured, but it cannot be taken lightly."

A study published in the Lancet medical journal suggests that H7N9 influenza is a mix of at least four viruses with origins in ducks and chickens.

Unlike the previous H5N1 outbreak, it is not deadly to poultry. It means it is much harder to track the spread of the virus.

A highly controversial piece of research in 2012 showed that it would take five mutations to transform H5N1 into a pandemic.

Prof Wendy Barclay, an influenza researcher at Imperial College London, said: "H7N9 might be one step closer to being able to become a pandemic than H5 is in nature at the moment."

It already has one of the five mutations when it is infecting birds.

"In people who have caught the H7 virus so far we can see [another] one of the important mutations occurring in those people in a matter of days," she said.