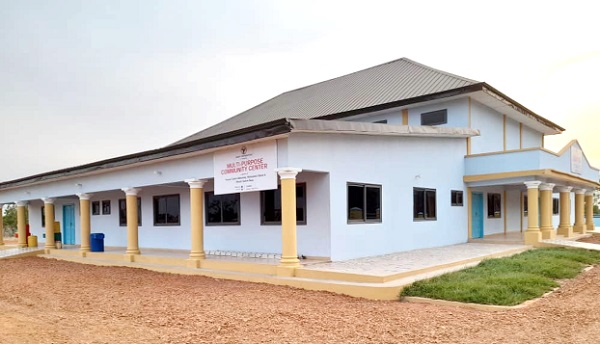 A GH¢1.3 million multi-purpose community centre has been inaugurated for the chiefs and people of Bamboi in the Bole District of the Savannah Region.

The centre holds a 300-person capacity auditorium, a 50-person capacity conference room, a library, a mini-clinic and a gym to complement the social, education and health needs of particularly the youth.

It was funded by the Zakat Foundation of America, an international charitable organisation based in the United States of America (USA) and implemented by its Ghana office.

The inauguration of the facility formed part of activities to commemorate the 20th anniversary of the organisation founded in Chicago, USA, in 2001. It, however, started operations in Ghana in 2002.

At last Saturday’s ceremony, the Country Director of the foundation, Mr Salia Alhassan, said the facility was to enhance the health, social and educational wellbeing of the community.

It is the latest social gesture by the foundation, which had undertaken water projects for the Bole, Mandari, Jama, Teselima and Bamboi health facilities and some communities in the Bole District, as well as donated medical items to some health facilities, including the Korle Bu and Komfo Anokye teaching hospitals and the Bole Government Hospital.

It also donated ambulance tricycles to the health facility at Buswema and computers to some schools and institutions at Bole.

Mr Alhassan said the foundation was also supporting about 300 orphans in its operational areas and had also constructed mosques in some Muslim communities, including Larabanga, Teselima Jugboi, Bamboi and other operational areas across the country.

It also supported the renovation of a church building at Telesima.

Mr Alhassan said the organisation was also supporting some women in the gari processing business, the training of some young women and men in dressmaking, auto mechanics and mobile phone repairs in its catchment areas at Bamboi, Bole and Kumasi to empower them economically.

He said the foundation had also expanded and extended its charity works to Cote d’Ivoire, Burkina Faso and Togo.

Mr Hassan thanked the foundation’s donors and all who had supported the organisation in diverse ways within its 20 years of existence to serve humanity, and urged the beneficiary communities of the projects to maintain them to enhance their lifespan for the benefit of generations to come.

The Paramount Chief of the Bamboi Traditional Area, Nana Kweku Dapaah, in an address read for him, thanked the Zakat Foundation for the community centre.

He said all efforts by the chiefs, opinion leaders and the youth to get a new facility did not materialise until the intervention by the Zakat Foundation.

He said the traditional council would put in place a committee to manage the facility and to ensure its maintenance.