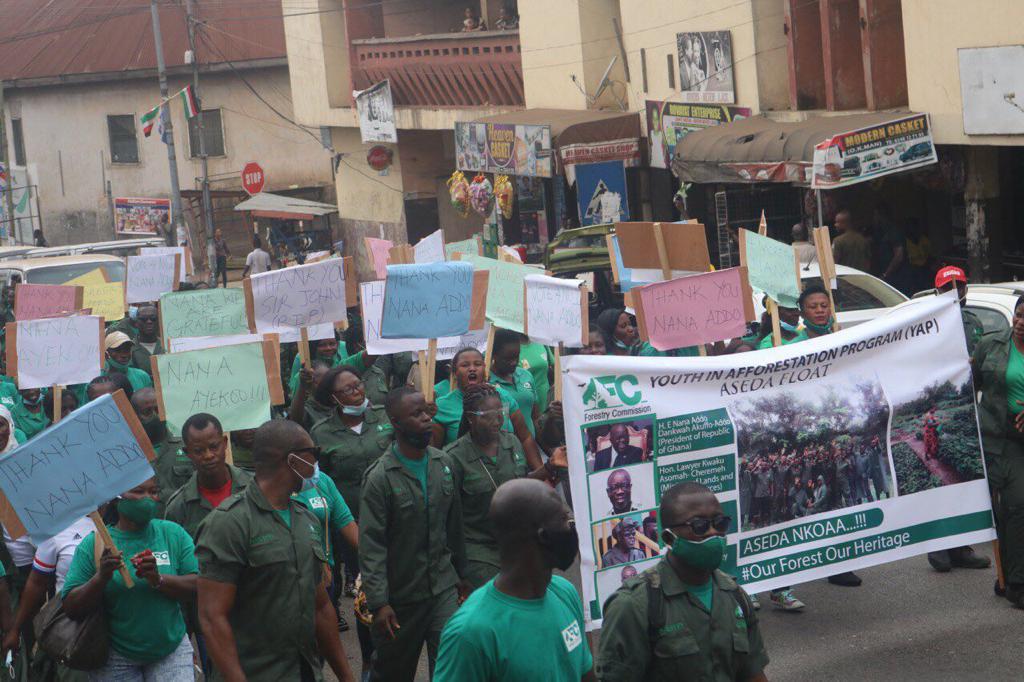 Some beneficiaries of the Youth in Afforestation Programme during the march through the streets in Kumasi. Picture by: EMMANUEL BAAH
30.5k Shares

Hundreds of beneficiaries of the Youth in Afforestation Programme (YAP), a subsidiary of the Forestry Commission, on Friday, paraded through some principal streets in Kumasi, to express what they described as their way of showing appreciation to President Nana Addo Dankwa Akufo-Addo, for creating employment opportunities for them.

Wearing branded T-Shirts, the group gathered at the Baba Yara Sports Stadium from where they walked through Amakom Roundabout to Labour Roundabout through Asafo and climaxed it at the Jubilee Park, where they were addressed by some regional leadership of the Forestry Commission and the Kumasi Metropolitan Assembly (KMA).

Some of the placards they carried had inscriptions some of which read: “Nana we are grateful," “4 More for Nana,” “Plant a tree and save a life,” “Thank you Mr President," “Thank you Forestry Commission,” Forestry feeds my family,” and “Thank you Nana Addo.”

Others read: “R.I.P. Sir John,” “Sir John Ayekoo,” “We are grateful to Forestry Commission” and “We are no longer jobless,”

The marched, they said was also to commiserate with the family of late Chief Executive Officer of the Forestry Commission, Mr Kwadwo Owusu Afriyie, popularly known as Sir John, who died about two months ago.

The walk, was under the theme: “Our Forest, Our Heritage”.

The General Secretary of the group, Mr Emmanuel Osei Aborah, addressing members after the march, commended the Nana Akufo-Addo led government for instituting what he said was adequate measures to redeem the youth from abject poverty.

He urged Ghanaians, more importantly the youth, to go out in their numbers and vote massively and retain President Akufo-Addo in power on December 7, 2020 to enable him to continue his developmental agenda.

The Ashanti Regional Manager of the Forestry Commission, Mr Augustine Gyedu said 10,000 youth in the eight forest regions in the Ashanti Region have so far been enrolled on the programme, out of the estimated 65,000 beneficiaries nationwide.

He noted that 42 million trees made of teak, ceiba, mahogany, oframo, and other exotic trees have been planted across the region in addition to other food crops planted under the Planting for Food and Jobs (PJF) programme.

He further hinted that government has made available free seedlings, and that once farm based organizations contacted their district Agric offices, they would get access to the free seedlings.

On his part, the Kumasi Metropolitan Chief Executive, Mr Osei Assibey-Antwi said the KMA's involvement in the Youth for Afforestation Programme (YAP) has massively revived the "Clean and Green Kumasi Project," aimed at greening Greater Kumasi.

He appealed to voters, more importantly the youth, to eschew all forms of violence as the country prepares for the December 7, 2020 general elections.