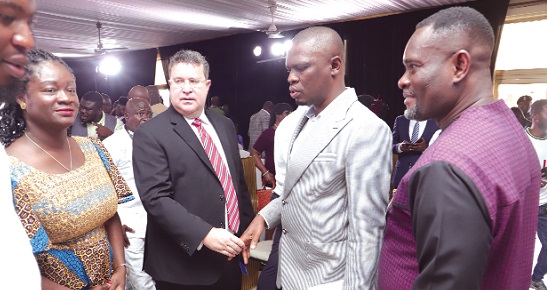 Mustapha Ussif (2nd from right), Minister of Youth and Sports, in a handshake with Pierre Laporte (2nd from right), World Bank Country Director for Ghana, after the launch of the programme. With them are Dr John Kumah (right), a Deputy Minister of Finance, and Kosi Yankey-Ayeh (left), Chief Executive Officer, GEA. Picture: SAMUEL TEI ADANO
30.5k Shares

A portal for receiving applications from potential beneficiaries of the GH¢1 billion YouStart initiative was opened yesterday for eligible applicants to register.

The opening of the portal, which also marked the official launch of one of the models under the state-assisted and private sector-funded entrepreneurship support, has paved the way for it to receive applications in the next six weeks, after which more than 50,000 applicants will be selected for training.

YouStart was introduced to ease constraints for existing and aspiring young entrepreneurs under the Ghana COVID-19 Alleviation and Revitalisation of Enterprises Support (Ghana CARES) programme, which is part of efforts to address the high youth unemployment rate in the country.

The initiative was announced by the government in the 2022 budget, with the objective of building an entrepreneurial nation and creating at least one million jobs for the youth in three years — from 2022 to 2025.

Through the programme, the government and its partners intend to commit about GH¢10 billion over three years towards the creation of at least a million jobs.

It is being implemented by the Ghana Enterprises Agency (GEA) and the National Entrepreneurship Innovation Programme (NEIP), with support from the World Bank.


It is a vehicle through which the government intends to provide funds and technical support for the youth between 18 and 40 years and youth-led businesses to assist them to start, build and grow their businesses.

It is being rolled out in three phases, comprising a district model where beneficiaries will be selected through special help desks in the 216 districts across the country; a commercial model, with banks on board, and the faith model, which will work with faith-based organisations to identify qualified candidates.

At the opening of the portal and launch of the district model at the Accra Technical University yesterday, the Chief Executive Officer of the GEA, Kosi Yankey-Ayeh, encouraged unemployed youth who desired to set up businesses to take advantage of the opportunities that the YouStart initiative presented.

"It is important to note that YouStart is not a funding vehicle but a combination of people, who desire to build businesses, and support from the government," she said.

She said the initiative was specifically to support the youth and it would provide training for 50,000 youth, with some of them receiving start-up grants.

She said at the end of the six weeks, the portal would be closed to applications and the selected applicants taken through a readiness screening and needs assessment, after which they would be trained to equip them with entrepreneurial skills.

“After the training, beneficiaries who are committed would be provided with financial support to cover the expansion of their business, acquisition of equipment, among others,” Mrs Yankey-Ayeh said.

He commended the World Bank for the grant to support the YouStart programme, the implementing agencies and all stakeholders.

He said the open and transparent portal would make it easy for all young people in the country to stand an equal chance of benefitting from the initiative.

To the implementing agencies, he urged them to make the process for selection stress-free, with equal chances for all.

Dr Kumah expressed the optimism that the initiative would support the youth who wanted to succeed on their own merit, no matter their class or background.

The World Bank Country Director for Ghana, Pierre Laporte, said the opening of the portal was an important milestone under the initiative.
He underscored the importance of youth employment in a country, stating that Ghana faced challenges of youth unemployment.

"The key challenge for Ghana is ensuring that there are sufficient and better quality jobs for the youth entering the labour market," he said, after expressing the hope that the YouStart initiative would contribute to address the challenge.

He urged the implementing partners to be open to feedback during the implementation of the initiative and remain flexible to address concerns.

Mr Laporte said the World Bank was ready to support the government in various programmes aimed at reducing youth unemployment.

"Currently, the bank is working with the government on a project that will support some aspects of the YouStart programme and focus on strategic sectors of the economy that hold potential for expansion, growth and job creation for the youth,” he said.

“The World Bank is also supporting the implementation of projects that focus on removing constraints on youth employment," he added.

Two persons who benefited from the initiative during the pilot phase, Nana Kofi Amponsah, a poultry farmer, and Deborah Anane Adjei, producer of sobolo (hibiscus beverage), testified about how it helped them to set up and expand their businesses.

They urged the youth to take advantage of the initiative and also commended the government for supporting the youth to contribute to the transformation of the economy.

Ms Adjei, who has a disability, was happy that the vulnerable in society were being considered for such opportunities.