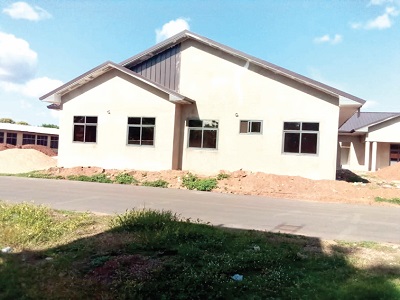 The under-construction Emergency and Trauma Centre in Yendi Follow @Graphicgh

Two non-profit organisations have started constructing an emergency and trauma centre for the Yendi Municipal Hospital in the Northern Region.

Mission 318 of the United States of America is constructing the $400,000 30-bed centre, in partnership with Global Mission Resource Centre, to cater for emergencies at the facility.

The two organisations have since 2008 been carrying out medical outreach programmes where doctors and nurses from the United States perform free surgeries for patients suffering from hernia, goiter and fibroid, among other diseases, at the hospital.

Construction works at the centre are currently 97 per cent completed, and the centre is expected to be handed over for use next month.

The Founder and Executive Director of Global Resource Centre, Reverend Emmanuel Kwabena Mustapha, announced the start of the project during a media briefing in Yendi.

The municipal hospital serves people in the eastern corridor of the region, where the lack of such a facility means referring patients under emergency conditions to the Tamale Teaching Hospital.

The hospital, which is supposed to serve as a referral facility in the area, is 73 kilometres from Tamale and is without an intensive care unit (ICU).

The gesture is the second support of the kind that the hospital had received from non-profit benefactors.

A $200,000 ICU with accompanying medical equipment was established in the hospital with funding from Care Unit Ghana and Global Mission Resource Centre.

Rev. Mustapha said at the time, anytime there was an emergency, the patients were referred to the Tamale Teaching Hospital, but most of them did not make it by the time they got to Tamale.

He said most of the patients would have been alive if the hospital had the ICU centre at the time.

Rev. Mustapha said it was for the same reason that they were constructing the emergency and trauma centre for the Yendi hospital.

He expressed gratitude to the Municipal Medical Superintendent, Dr Ayuba Abdulai, and his management team for the support towards the construction of the facility.

He indicated that the Member of Parliament for Yendi, Alhaji Farouk Aliu Mahama, and other citizens had also contributed in cash and in kind to support the construction process.