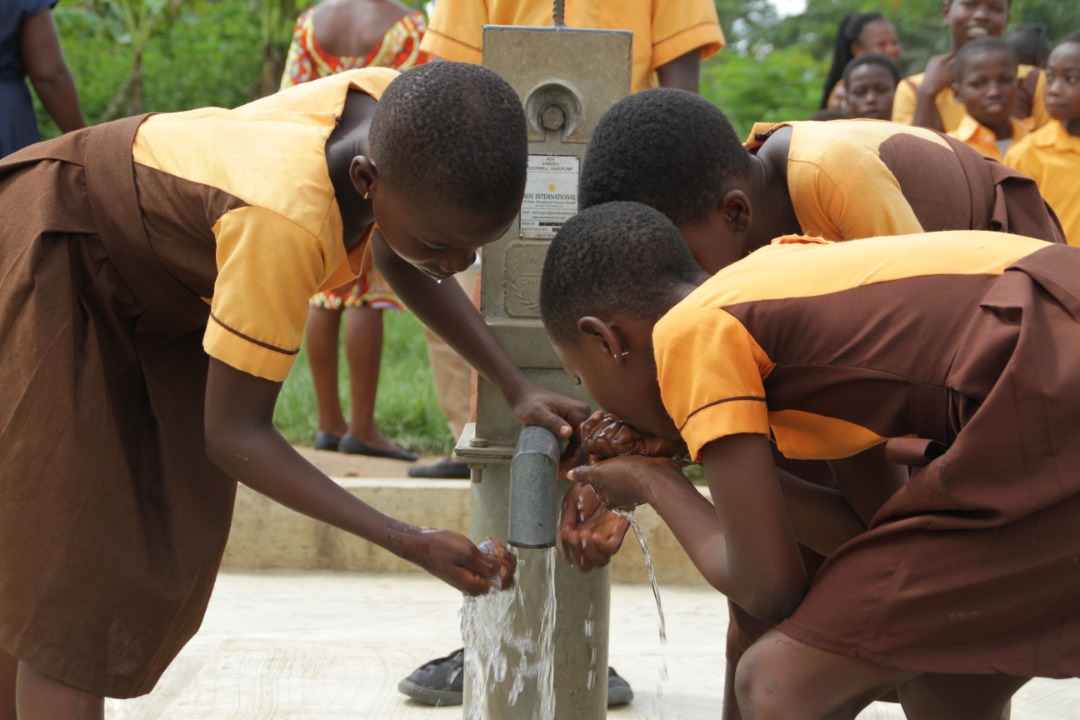 One in four primary schools have no drinking water service, with pupils using unprotected sources or going thirsty according to UNICEF. PICTURE BY EDMUND SMITH-ASANTE
30.5k Shares

World Vision, a child-focused Christian relief, development and advocacy non-governmental organisation working in Ghana has lauded the government, development partners, other NGOs, the private sector and non-state actors for ensuring that 80 out of every 100 Ghanaians have access to potable water.

It has, however, reminded the government that six million children and their families still do not have access to potable water.

These were contained in a statement jointly issued by the WASH Technical Coordinator, Mr Yaw Attah Arhin and the Communications Manager of World Vision Ghana, Mr Washington Nuworkpor, to mark World Water Day which falls on March 22 every year, and was on the theme; “Every Child Deserves Clean Water.”

The child-focused NGO said, “On the occasion of World Water Day 2021, World Vision Ghana wishes to congratulate government, development partners, NGOs/CSOs, private sector and other non-state actors for working hard to ensure that 80 per cent of Ghana’s population has access to safe drinking water.

“We, however, need to remind ourselves, that while we have made some strides, some six million children and their families still lack access to safe water.”

Urgent steps needed
Stating that it believes that nothing can be more important to child wellbeing than the access to safe drinking water, World Vision Ghana has, therefore, called on the Government of Ghana to as a matter of urgency, prioritise and increase investments to ensure that every child everywhere has access to safe water.

It also urges the government to explore and invest in alternative water supply systems where underground water is not feasible and “Take appropriate steps to protect our water bodies from pollution and degradation to reflect the theme for World Water Day 2021 ‘VALUING WATER.’”

Further, World Vision wants the government to take immediate steps to address water quality challenges and the inequalities associated with access to water, including those identified in the 2017/18 Multiple Indicator Cluster Survey (MICS) report and also pay attention to the delivery of safe water in schools and healthcare facilities, in order to create a conducive environment for quality education and healthcare.

MICS
With the 2017/18 Multiple Indicator Cluster Survey (MICS) report as the basis for its call, the NGO reiterated the report’s finding that close to eight persons in every 10 households had E-coli (faecal contamination) in their drinking water, while close to five out of 10 water sources were also affected.

“There is a clear wealth disparity on basic water access, with the wealthy nearly twice as likely to have access than the poor. Additionally, urban dwellers are more likely to have basic access than those from rural areas,” the MICS report states in one of its key messages.

The MICS report defines basic drinking water services needed by all, which corresponds to Sustainable Development Goal (SDG) 1.4.1, as an improved source, provided collection time is not more than 30 minutes for a roundtrip including queuing.

Improved drinking water sources, it says, are those that have the potential to deliver safe water by nature of their design and construction, and include: piped water, boreholes or tubewells, protected dug wells, protected springs, rainwater, and packaged or delivered water.

Surface water (No service) refers to the direct collection of water from surface waters such as rivers, lakes or irrigation channels.

Importance of water
Reaffirming its commitment to partnering government, the private sector, NGOs/CSOs and other stakeholders towards increased access to safe water, World Vision opines that the importance of water to human beings cannot be over-emphasised, as it promotes improved health, livelihoods and general wellbeing.

“Indeed, it is often said that ‘water is life’ and no strategy for poverty reduction can ignore people’s vital requirement for safe water.

“Sadly, millions around the world, including Ghana, do not have access to this vital resource. It is not uncommon to find women and children travelling long distances in search of safe water but only ending up fetching water from rivers, streams, unprotected ponds and other contaminated water sources,” World Vision laments.

It adds that in several rural and small towns, community members still share drinking water sources with cattle and other animals, while 49 per cent of public basic schools lack access to safe water on their premises, quoting the Education Management Information System (EMIS) 2018.

The lack of water also affects proper sanitation and handwashing facilities which may be fixed or mobile and include a sink with tap water, buckets with taps, tippy-taps, and jugs or basins designated for handwashing.