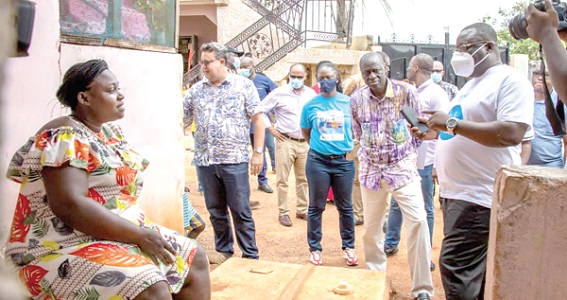 Maame Yeboah (left), a beneficiary of the sanitation project, sharing her experience with the team Follow @Graphicgh

The Vice-President of the World Bank for Western and Central Africa, Ousmane Diagana, has commended Ghana for efforts in providing low-income communities with household toilet facilities to enhance decent living.

He said poverty could be seen or felt in many ways, including the lack of access to some services that contributed to the dignity of a human being.

Mr Diagana made the observation during a field visit to Adiebeba, one of the communities in the Kumasi metropolis benefiting from the Greater Kumasi Metropolitan Water and Sanitation Project (GKMA SWP).

The project is being implemented by the Ministry of Sanitation and Water Resources and is funded by the World Bank with a $125 million credit facility.

Mr Diagana said the project was providing the much-needed assistance to the people, “especially regarding access to water and sanitation”, stressing that “in urban areas also there is poverty, and this poverty can be felt in many ways, including the lack of access to some services”.

“This is extremely important and the bank has invested more than $125 million into the project, and given its impact and the necessity for the population to have access to this type of service, we will certainly continue to provide support as needed,” Mr Diagana said.

Following the successful implementation of the Greater Accra Metropolitan Area Sanitation and Water Project from August 2014 to December 2020, the World Bank approved an additional credit facility for the government to extend it to the Ashanti Region.

GKMA SWP, which started in April last year, seeks to provide 30,000 households and 120 institutions with access to improved sanitation facilities, including provision of water supply.

It is being implemented in eight districts that have been identified as flagship areas. These districts are Ejisu, Kumasi, Asokwa, Kwadaso, Oforikrom, Asokore-Mampong, Suame and Old Tafo.

The Project Coordinator for GKMA SWP, George Asiedu, said after eight months of implementation, the project had built 2,417 improved household toilets for more than 19,500 low-income beneficiaries, 55 per cent of them being females.

Maame Yeboah, one of the beneficiaries that the team interacted with, was full of praise for the project proponents for providing her household with a place of convenience at an affordable cost.

She said the living conditions of her family had improved.