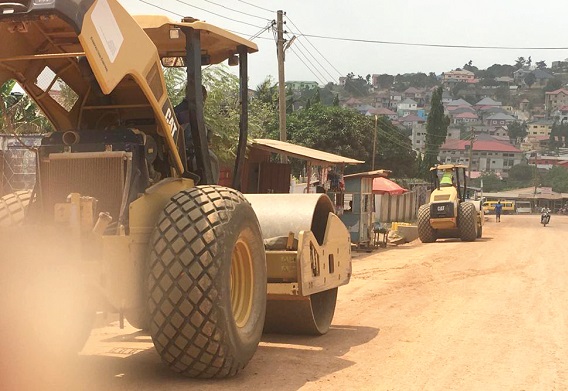 Construction works have restarted on some roads in the Ga East Municipality in a bid to improve on road infrastructure.

The works began about a year ago but were abandoned midway through the process.

Areas benefiting from the construction works include Ashongman Estate, Bridge and Bohye.

Heavy-duty equipment have been moved to the sites, while workers man the machines and work on the processes, with the construction of drains, levelling and asphalting of the roads, among other works, are currently ongoing.

Road projects in other parts of the municipality such as Kwabenya, Comet and Musuko have already been done.

The Assembly Member of Ashongman Estate, Cornelius Addo, said the construction stalled due to financial challenges, adding that the restart of the works had been enabled by new funds made available to the contractor.

He said the resumption of the project was a welcoming relief to residents, explaining that the abandoned project seriously inconvenienced the residents.

“When the contractor left the site without completing the project, we had serious issues with dust. Dust became not just a nuisance, but a health hazard as well,” he said.

Mr Addo expressed satisfaction about the current pace of the project, and commended the contractor for the work.

He, however, appealed to the residents not to litter the drains along the road, saying such practices would choke the drains and reduce the life span of the roads.

The contractor of the Ashongman Estate project, who identified himself as Mr Zafar, disclosed that the contract covered six kilometres.

He said the two-phase project was expected to be completed in about a month’s time.

Some of the residents expressed happiness about the restart of the project.

“I am very relieved, I must say. Now that the roads are being fixed, the dust wouldn’t paint my walls and enter my rooms anymore. I am very happy,” he said.

A hairdresser, Ms Vivian Mensah, said she was elated that the roads were being constructed and added that it had been a major headache for the residents.