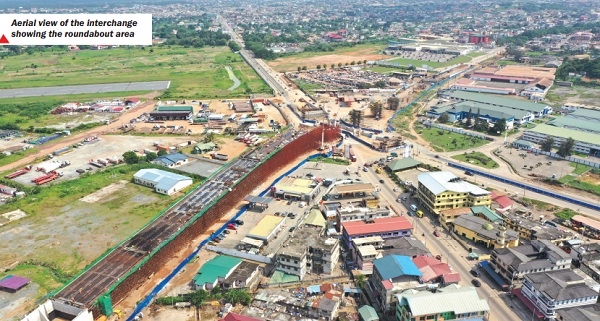 CONSTRUCTION work on one of the two interchanges being constructed in the Sekondi-Takoradi Metropolis in the Western Region which began last year, is progressing steadily.

The site, known as the PTC, Kwame Nkrumah Roundabout in Takoradi, is expected to ease traffic congestion in the regional capital.

The project, which will take 30 months to complete, will be a three-tier interchange with direct access to the central business district, which easily gets congested with human and vehicular traffic.

The interchange includes expanded roads, which are expected to improve traffic flow in the Sekondi-Takoradi Metropolis and provide seamless connection to towns, cities and other parts of the Western Region and beyond.

The project did not see many challenges in terms of expanded roads, since there are partially non-incumbent buffers along the double road from the Paa-Grant Roundabout towards Agona and Tanokrom to Axim Road.

When the Daily Graphic visited the site, pillars for the interchange were in place with other massive steel and concrete works ongoing while work started early and closed late.

The twin-city of SekondiTakoradi which was once vibrant, playing host to timber, cocoa processing, railways and a port, among others, saw the decline in most of these industries with some timber firms converted into inland ports.

With the discovery of oil in commercial quantities, the city to some extent regained its glory, with the influx of all forms of activities, oil and gas supply service companies, fabrication yards, relocation of all branches of banks and insurance companies and heavy-duty haulage, which came with its correspondent increase in vehicular traffic.

New workers relocated to fill in the vacancies, pushing demand for goods and services and accommodation, among others. The pedestrian movements led to a surge in commercial transportation (Bolt, Cab), corporate vehicles, private car owners and good old “trotro” services.

Therefore, managers of the city realised that the city required improvement in roads with interchanges to ensure easy distribution of the mounting traffic situation.

Takoradi, no doubt is one of the fastest growing cities in the country, which also serves as the only transfer city receiving from Accra, Kumasi, Cape-Coast, adjoining districts of Shama, Ellembelle, Ahanta West, Jomoro, Tarkwa municipalities.

That aside, the haulage services from neighbouring countries — Liberia, Cote d’Ivoire, Togo, Benin and Nigeria pass through the twincity, with other landlocked countries also routing goods through the Port of Takoradi.

Aside from the interchange, the contractors are working on major roads between the Ahanta West and Tarkwa Nsuaem municipalities to facilitate the movement of goods and services — with the new roads taking into consideration tonnage for long lifespan.

He said work at the project site was progressing steadily amid a few challenges and that so far, three piers out of 19 had been completed as of April, while the others were at various stages of completion.

The Axim Road ramp is also about 60 per cent completed.

Piling work for the 4th Pier has been completed. The status of work completed so far, he said, was more than 30 per cent.

Mr Darko-Mensah said there was no doubt that road networks opened up more areas and stimulated economic and social development, and that for the Western Region’s endowments, the government would continue to improve the infrastructure.

“As we speak, the reconstruction of the multipurpose Takoradi Central Market, the GNPC Operational Headquarters and many other road projects are ongoing in the region,” he said.

As part of the government’s commitment to the region, Mr Darko-Mensah, who is also the acting Metropolitan Chief Executive, said he would roll up his sleeves and follow every project to ensure that they were delivered on time and within budget for the benefit of the people.

He said the twin-city and the region had become economically vibrant with many activities, including banking, oil and gas, port, insurance and other financial services, hence the need to ensure improved infrastructure to contain the demands.

He said there were other interchanges to be constructed in Sekondi-Takoradi, including one at the Paa-Grant Roundabout, but stressed that “that project is not being executed simultaneously with that of the PTC, Kwame Nkrumah Roundabout due to the associated inconveniences to the motoring public.”

Currently, he said, the metropolitan assembly and other stakeholders had studied the situation to ensure work did not impede traffic flow and slow productivity.

Touching on dualisation of the Paa Grant Roundabout to Sekondi College near Inchaban, which has begun in earnest, the minister said: “The pipelines belonging to the Ghana Water Company are also being relocated, with works also progressing steadily from Freddy Mall at Fijai towards Adiembra Junction, cutting and clearing of the way for the project.”

Phase one of this project would focus on the expansion of the road that leads from the Paa Grant Roundabout to Sekondi to help reduce inconveniences to motorists.

Major construction works, he said, had begun and required the cooperation of all.

The only challenge the news team saw was the assembly’s guards battling recalcitrant drivers who had refused to wait for their turn at designated places to pick passengers and rather interfered with operations by doing pickups at every available space near the work area.