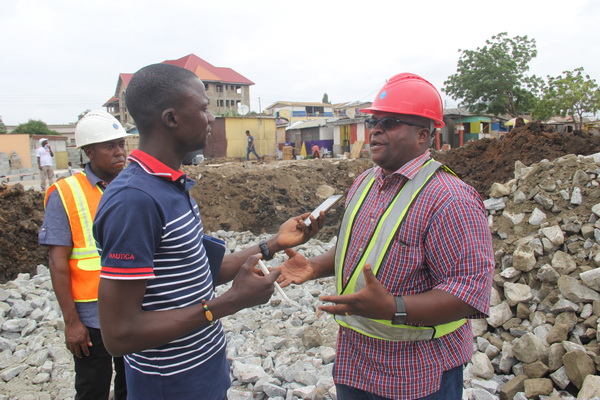 Dr Michael Adjei Anyetei (3rd left), Deputy Managing Director in charge of Engineering, Ghana Railway Company Limited explaining how the work on the Dome railway is going to be done to Mr Timothy Nnegbe (left), a reporter with the Daily Graphic during a tour of the project site. Looking on is Mr Patrick Mensah (2nd left), Site Supervisor. Picture: EDNA ADU-SERWAA
30.5k Shares

Work on the refurbishment of the Accra-Nsawam railway is progressing steadily.

The $20 million project is focusing on using suitable materials that will make the railway more compact to accommodate fast train services that will soon be introduced into the country.

As part of re-engineering works, the top soil which is considered as bad material because of its material composition, is being replaced with laterite for proper stabilisation.

The soil stabilisation and other preparatory works have already been carried out on the rail line in areas along Accra, Graphic Road, Kwame Nkrumah Circle and Achimota Neoplan Station.

Currently, the workers of the Ghana Railway Company Limited (GRCL) are working on the soil formation and stabilisation at Dome in the Ga East Municipality.

When the Daily Graphic visited the project site at Dome at about 10 a.m., earth-moving equipment were clearing the top soil to pave the way for stabilisation and compacting of the soil.

Heavy trucks were also seen carting heaps of unwanted matter from the railway line, while the workers filled the base with laterite for rail tracks to be laid.

The Deputy Managing Director of the GRCL, Dr Michael Adjei Anyetei, and the site supervisor, Mr Patrick Mensah, were on hand to provide technical assistance and also ensure that quality work was done.

A number of illegal structures that straddled the railway line had been cleared in preparation for the project.

It was also observed that work could not continue in some portions of the site because underground pipelines had been cut, causing water to gush out.

Dr Anyetei explained that the work at the Dome stretch of the project would take about three weeks to be completed because some time had to be spent to clear the water that was emanating from the damaged pipelines.

He said the company had engaged the Ghana Water Company Limited (GWCL) and the Electricity Company of Ghana (ECG) to deal with the situation since their service lines interfered with the rail lines.

He bemoaned the extent to which encroachment had delayed progress of work, but added that more engagements were being done with chiefs and other stakeholders to address the situation.

“More than 80 per cent of the encroachers on the railway line have vacated and their structures pulled down. Sensitisation and education are also going on for people to see the importance of the project,” he said.

Dr Anyetei said the government had advanced steps to introduce faster train services in the country, a move that was aimed at improving the quality of the train sector.

He did not give any timelines regarding when the new trains would be brought into the country, but said the government was working seriously behind the scenes and would soon announce the novelty.

“There are stringent procurement procedures in this country so we are making sure that we do not flout any of them. Until we exhaust all the processes, I cannot give a definite timeline but I can say for a fact that we are working seriously to get it done,” he stressed.