Woman appeals to President, IGP to help find her husband 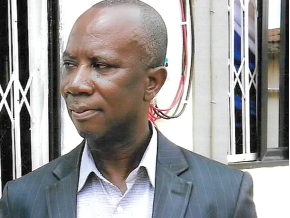 A 48-year-old petty trader at Akyem Oda, Mrs Mercy Kwarteng, has appealed to President Nana Addo Dankwa Akufo-Addo and the Inspector-General of Police, Dr George Akuffo Dampare to help find her husband who had gone missing since December 15, last year.

The mother of five, who was almost in tears, made the appeal through the Daily Graphic at Akyem Oda last Wednesday said the appeal had become imperative since as all efforts to find the whereabouts of her husband proved futile.

She said around 9.30 a.m. on December 15, 2021, Johnny Essel, a driver of the Agricultural Development Bank (ADB) in Accra called Mr Edward Yaw Kwarteng, 57, to tell him that he was on his way from Accra to Oda so her husband should travel with him to a place to transact some business.

Mrs Kwarteng said around 3.30 p.m. that day, the husband left home to meet Essel at the Oda business centre to enable him make the journey and had since not returned.

According to her, she lodged a complaint with the Oda Municipal Police Command which after collecting the itemized phone calls arrested Essel to assist in investigations.

According to her, two weeks after Essel had been granted police inquiry bail, the suspect came to her residence around 11 p.m. to enquire why she reported him to the police and demanded from her the phone number of the investigator of the case, to which she declined.

Mrs Kwarteng stated that after the police had granted Essel police inquiry bail, she and Mr Ampah had been receiving threatening phone calls from anonymous callers, compelling the relatives of Mr Ampah to change his residence to ensure his safety.

When the Daily Graphic contacted the Oda Divisional Police Commander, Assistant Commission of Police (ACP) F. S. Adikah,he confirmed that his outfit had taken over the matter to conduct proper investigations to identify and apprehend the perpetrators of the crime.

In a related development, the Chief of Akyem Nkwantanan near Kade in the Eastern Region, Barima Adanse-Akyem Omane has added his voice to the call on the President to help find the whereabout of Mr Yaw Kwarteng, who is his nephew.

Making the appeal through the Daily Graphic, Barima Omane, who is a Tema based lawyer, said the appeal had become necessary due to the slow pace of investigations being conducted by the Oda police into the matter.