Witness grilled over meeting with Opuni 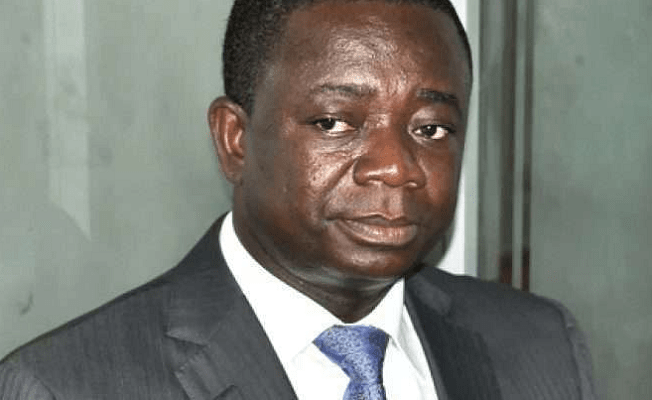 Counsel for Seidu Agongo, the businessman who is standing trial with Dr Stephen Kwabena Opuni for causing a financial loss of GH¢271. 3 million to the state, said yesterday that a meeting Dr Opuni held with scientists of the Cocoa Research Institute of Ghana (CRIG) was mainly to discuss the exhibition of CRIG products in China and not the reduction of the testing period for fertilisers.

Mr Benson Nutsukpui, counsel for Agongo, who was cross-examining the Executive Director of CRIG, Dr Franklin Manu Amoah, suggested to him that nothing but the exhibition was the centre of discussions at the meeting.

But Dr Amoah, who is the first prosecution witness in the case, disagreed.

He had earlier told the court that Dr Opuni, during his tenure as COCOBOD boss, ordered CRIG to reduce the testing period of fertilisers that would be used on cocoa farms.

According to him, as a result, CRIG reduced the testing period for the Lithovit Foliar Fertiliser (LFF), which was the fertiliser at the centre of the trial, from two years to six months.

He added that even after CRIG had reduced the testing period for the LFF, which, he said, was in powdery form, COCOBOD, under Dr Opuni, bought a liquid LFF from Agongo’s company, Agricult Ghana Limited, which was never tested by CRIG.

During cross-examination yesterday, Mr Nutsukpui told Dr Amoah that the topic for discussion between Dr Opuni and the scientists was not the reduction of the testing period of fertilisers, a claim the witness refuted.

According to counsel, the topic for discussion at one of such meetings was the exhibition of CRIG's products at a fair in China and not the reduction of the testing period for fertilisers.

Below are excerpts of the cross-examination:

Mr Nutsukpui: I am suggesting to you that for all the participants at that meeting, the topic of exhibition of CRIG products in China was discussed.

Dr Amoah: I don't remember exactly but what I do remember is that the main purpose of the meeting was discussion on testing of chemicals and fertilisers at CRIG.

Mr Nutsukpui: Has there ever been a topic of the exhibition of CRIG products in China?

Dr Amoah: COCOBOD periodically participates in fairs and exhibitions outside Ghana, to which CRIG may be requested to bring some of the by-products that they have developed to be sent for exhibition.

Mr Nutsukpui : I am putting it to you that from the participants at the meeting, the first item on the agenda was CRIG's participation in the China exhibition.

Dr Amoah: I wouldn't remember, but the major issue for discussion at that meeting was the testing of chemicals and fertilisers and at such meetings, other issues for discussion could come up.

Dr Opuni, a former Chief Executive Officer of COCOBOD, and Mr Agongo, are standing trial for allegedly engaging in various illegalities that led to the distribution of substandard fertiliser to cocoa farmers and caused a financial loss of GH¢271.3 million to the state.

The two accused persons had, however, denied any wrongdoing and pleaded not guilty to a total of 27 charges.

The cross-examination continues on Monday, October 15, 2018.