Who steps into Afari-Gyan’s shoes as he retires in June?

The search for who becomes the new Chairman of the Electoral Commission (EC) has begun in earnest, as the current Chairman, Dr Kwadwo Afari-Gyan, will proceed on his statutory retirement in June.

In line with this, two political parties and a political pressure group have called on the Council of State to engage in broader stakeholder consultations in advising the President on the choice of the next chairman of the commission.

Accordingly, they have appealed to President John Dramani Mahama and the Council of State to ensure that the selection of a new EC boss is done at least in consultation with the political players.

The parties are the New Patriotic Party (NPP) and the Progressive People’s Party (PPP), while the pressure group is Let My Vote Count Alliance (LMVCA).

Relatedly, the National Democratic Congress (NDC) has expressed the wish that “we should not turn the appointment of the new EC chair into a partisan battle where the NDC, NPP, PPP or PNC are struggling and fighting to have their favourite”.

With Dr Kwadwo Afari-Gyan set to reach his retiring age of 70 in June, civil society organisations and political parties have already started the debate within the public space on who takes over from him.

Article 70(2) of the 1992 Constitution maintains: “The President shall, acting on the advice of the Council of State, appoint the Chairman, Deputy Chairmen and other members of the Electoral Commission.”

Having served in his position for over two decades, Dr Afari-Gyan helped the EC to prepare a new Constitutional Instrument (CI) which had been laid before Parliament before the conduct of the botched district-level elections which otherwise would have been  conducted on Tuesday, March 3, 2015.

An action against the EC at the Supreme Court by a Winneba-based fisherman, Benjamin Eyi Mensah, led to the cancellation of the entire process which had gulped GH¢317 million.

Daily Graphic sources indicate that the government has put in place a programme leading to the appointment of a new EC Chairman to replace Dr Afari-Gyan, who was born on June 18, 1945.

Meanwhile, two schools of thought have emerged as to who becomes the new EC boss.

While some governance experts expect the new EC boss to come from outside the commission, others think that such a person must come from within it.

Those arguing for an insider to become the new chairman contend that such a personality would be someone who already has better appreciation of the problems of the EC and will ensure smooth transition, continuity of service and have no difficulty steering the affairs of the commission.

Those in favour of somebody from outside the EC argue that such a person with a legal background stands a better chance of steering the EC away from the many land mines that have occasioned its operations over the last few years, especially after the 2012 elections and the recent botched district-level elections.

They also contend that the EC appears to be bogged down by credibility issues and somebody from outside will be able to win the trust of all stakeholders, including the political parties, civil society groups and the electorate.

It would be recalled that early this year the General Secretary of the NPP, Mr Kwabena Agyei Agyepong, called on the President to undertake widespread and thorough consultations before appointing a new chairman of the EC.

In his view, the EC had suffered major setbacks arising from embarrassing revelations during the election petition at the Supreme Court and the recent ruling of the Supreme Court which culminated in the cancellation of the district-level elections.

He stressed that it was important for the commission to win back the confidence of Ghanaians.

Relatedly, it would be recalled that four names have emerged as potential successors to Dr Afari Gyan.

They are the Chairman of the Presidential Commission of Inquiry that inquired into the 2014 World Cup in Brazil, Mr Justice Senyo Dzamefe, who is also a Court of Appeal judge; the Executive Director of the Institute of Democratic Governance (IDEG), Dr Emmanuel Akwetey; the Deputy Chairman in charge of Operations at the EC, Mr Amadu Sulley, and the Executive Director of the Centre for Democratic Development (CDD-Ghana), Professor Emmanuel Gyimah-Boadi. 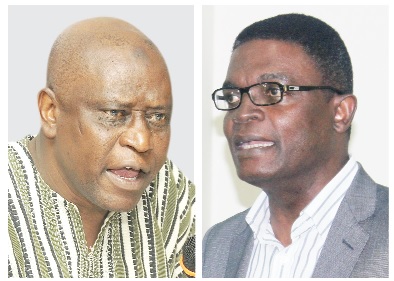 But Prof. Gyimah-Boadi, who felt honoured and flattered to have been linked with the position, has, however, said he is not interested in succeeding Dr Afari-Gyan, saying he has a lot on his plate and cannot take up the EC top job.

Some workers within the EC, in separate interviews with the Daily Graphic over the weekend concerning who replaces Dr Afari-Gyan from within the EC, indicated their preference for Mrs Georgina Opoku Amankwaa, the current Deputy Commissioner in charge of Administration.

They contended that as a person with a legal brain, she was far better placed to be accepted as the new chairman than Mr  Sulley.

In their view, although Mr Sulley had risen through the ranks of the EC from being Brong Ahafo Regional Director, the Director in charge of Research, Monitoring and Evaluation to Deputy Chairman in 2012, Mrs Agyei brought some freshness in continuity to the job and would be easily accepted.

Justice Dzamefe became a popular name in media circles after he was appointed Chairman of the presidential commission  in 2014.

He was tasked to help Ghanaians understand how a promising Black Stars team crashed out of the FIFA World Cup in a shambolic and disgraceful manner and the matters arising thereof. 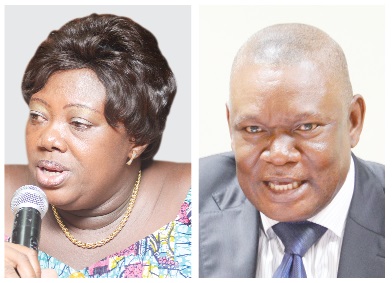 Firm but jovial when he needed to calm tensions, the judge was on national television for a month as top officials in football circles gave testimony at the commission.

He mockingly told a former Sports Minister: “We will use you as a guinea pig to make our corrections.”

Some political watchers also note that the EC finds itself in a mess because of the lack of legal knowledge at the top and since the chairmanship position is equivalent to that of a Court of Appeal judge, then Justice Dzamefe looks the most capable for it.

The United States 2015 “Martin Luther King Jr Award for Peace and Social Justice” conferred on Dr Akwetey is the latest testament to his contribution to governance issues in Ghana.

Dr Akwetey left academia in Canada to form IDEG in 2000 as an independent, not-for-profit policy research and advocacy organisation which has grown to become a notable voice of reason in public discourse on governance issues.

He served as advisor on the former German President Horst Köhler’s “Partnership with Africa Project”.

Justice Dzamefe and Dr Akwetey are likely to square it out with Mr Sulley and maybe Mrs Agyei.

In an interview with the Daily Graphic, the National Organiser of the NPP, Mr John Boadu, explained that the party wanted the Council of State, the body vested with the power to advise the President on the appointment of  the new EC boss, to put in place a mechanism that involved all the major stakeholders, including political parties and civil society, in an open and transparent manner in setting, first of all, the criteria for selection and, secondly, in settling on a person of integrity whose appointment would meet the endorsement of all.

To that end, Mr Boadu called on the Council of State to take a cue from the EC itself and its relationship with political parties, through the Inter-Party Advisory Committee (IPAC), in the formulation of regulations and guidelines for elections.

“Despite the fact that the Constitution jealously protects the independence of the EC, the EC has seen the need to respond to the national demand for a greater democratic engagement of stakeholders through the setting up of IPAC.

“In fact, the Supreme Court, in delivering the election petition verdict on August 29, 2013, even went as far as to ask for IPAC to be backed by law.

“Also, with regard to the ongoing electoral reform process, the EC has formed a 10-member committee with political parties and civil society groups. The Council of State should take a cue from this and open up the consultation process to inform the advice it finally gives to the President,” he stated.

Wide consultations in the selection of a new EC chair, according to Mr Boadu, would go a long way in restoring credibility to the battered image of the commission, which in recent times had been plagued by bad publicity regarding the conduct of the 2012 elections and the petition in the Supreme Court, as well as the botched district assembly elections.

“We, therefore, encourage the Council of State to open its doors for more consultations, which should be non-partisan in nature, to help rebuild public confidence in the country’s electoral process.

“In fact, anything short of that has the potential to mar next year’s general election which, in effect, can be very, very disastrous for this country,” he said.

The National Organiser of the NDC, Mr Kofi Adams, however, said the new EC boss must be a person with a high moral standing.

He said it was his wish that “we should not turn this appointment into a partisan battle where the NDC, NPP, PNC or PNC are struggling and fighting to have their favourite”.

Mr Adams said President Mahama had proved to have done a good job in appointing Ghanaians of high standing to occupy such sensitive positions and he was convinced that the process leading to the appointment of the new EC boss would be well-informed.

He advised all stakeholders, including the political parties, to not be seen to be setting new rules in the appointment of the EC boss, saying, “It is not the first time; past Presidents have appointed chairmen to the EC and the one given the mandate to appoint a chairman will be informed by what our Constitution says.”

The General Secretary of the PPP, Mr Kofi Asamoah-Siaw, said the PPP was in support of the recommendation of the Constitution Review Commission that the President should appoint the new EC chair with two-thirds parliamentary approval, as well as support across the political parties.

“We want the person finally appointed to be credible and accepted by all; somebody who will come from outside the present EC with fresh ideas who will embrace electoral reforms, including the use of technology to record zero rejected ballots,” he stated.

According to him, the PPP did not want somebody from the EC because there was a certain level of mistrust, saying somebody from outside would help boost the sinking image of the EC.

The PPP also urged the President to put out some possible names for the EC chair to inform public debate.

The LMVCA, a coalition of young Ghanaians from across the political spectrum and beyond, argued in a statement: “We do not want to have imposed on the nation a person of deep-seated doubtful integrity, a probability that we wish to assure the appointing authority would not pass without aggressive, legitimate resistance from the young people of this country.”

The statement, signed by the convener, Mr David Asante, said the group was calling for a total transparent process with full public engagement in the matter.

“As the Constitution says and Ghanaians expect, the next EC boss must be competent, just and with no trace of political allegiance to any of the political parties,” it stated.

It said in the same way that all the major stakeholders, including the political parties and civil society groups, had been involved in the electoral reform, “we want to see even greater democratic engagement in the selection and appointment of the next EC boss”.

“The LMVCA calls on President Mahama to heed our request in the interest of rebuilding public confidence in the country’s electoral process and in his own commitment to democracy. Anything short of this will be strongly resisted,” it stated.