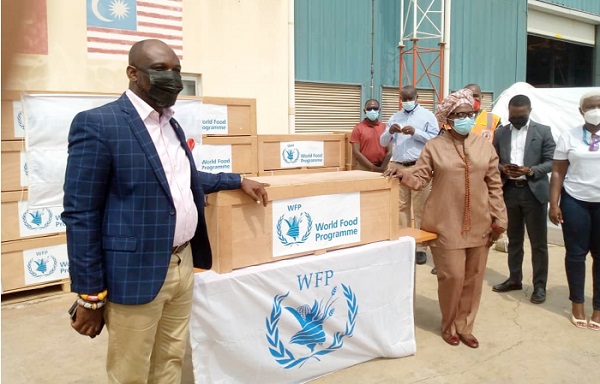 The World Food Programme (WFP) has handed over 40 family-size tents worth about $20,000 to the National Disaster Management Organisation (NADMO) to support the victims of the recent explosion at Appiatse in the Western Region.

The tents are specially designed to accommodate families and provide them privacy and comfort.

At a ceremony to hand over the tents, the WFP Country Director, Ms Barbara Tulu Clemens, said the support followed a request from NADMO in response to the findings of a joint assessment by the UN Inter-Agency Working Group on Emergency.

She said the assessment highlighted the need for family-size tents for the victims to complement some larger tents that had earlier been provided by some organisations to accommodate some of the victims.

The Deputy Director-General of NADMO, Mr Seji Saji Amedunu, said a number of male victims of the explosion were still staying in the temporary accommodation provided in hotels due to the lack of tents.

He said the organisation would require more of such family tents to ensure that all the victims were properly accommodated at the camp while they awaited the reconstruction of the community for resettlement.

The temporary camp has presently utilised tents provided by UNICEF and other donors to accommodate men, women and children separately.

Mr Amedunu said currently, the public had made mainly rice and cooking oil donations to the victims, stressing that other varieties of food, such as beans, yams, palm oil, plantain, gari, sugar and groundnuts, were required to balance their nutritional intake.

The WFP's emergency response over the years has included supporting NADMO to improve contingency planning and joint rapid risk assessment.

It is said to have also supported NADMO to establish a flood information system which enables it to monitor the impact of floods in near real-time and determine the number of affected people, crop land and facilities such as schools, clinics and markets destroyed by floods.