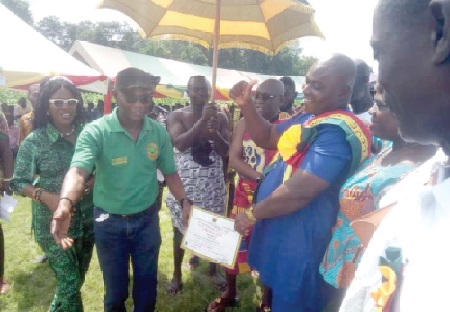 Daniel Osae from Quarshie was adjudged the Overall Best Farmer in the municipality, and was presented with a motor king tricycle, a motorbike, a wheelbarrow, a fridge, a knapsack sprayer, two machetes and a certificate of honour.

At the well-attended ceremony, the Chief Executive of the West Akyem Municipal Assembly, Seth Oduro-Boadu, commended the award winners for their hard work, and urged other farmers in the area to take a cue from them to maximise their output in order to win awards in the years ahead.

He enjoined farmers to add value to their farm produce in order to get more income from their toil.

He advised the youth to venture into agriculture to generate money for their livelihood, and also to boost food production in the country.

Mr Oduro-Boadu stressed that the government was finding a lasting solution to farmers’ challenges such as poor road network and the high cost of farming inputs.

He announced that the municipal assembly and the Member of Parliament for Lower West Akyem, Charles Acheampong, had distributed 2,200 oil palm seedlings to needy farmers in the area free of charge for cultivation.

The Chief of Asamankese, Osabarima Adu Darko III, urged the youth in the area to go into large-scale farming to supplement the efforts of the ageing farmers, saying there was dignity in farming.