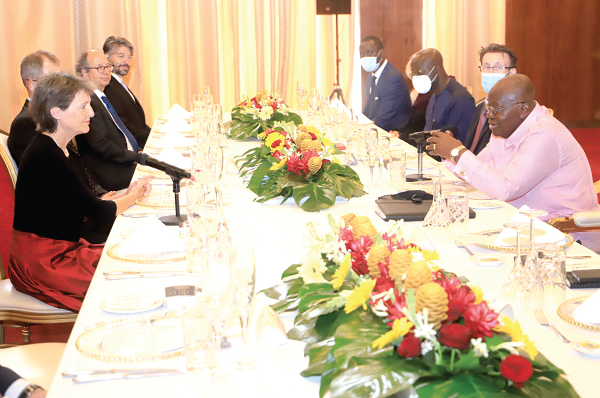 President Akufo-Addo in a discussion with Ms Simonetta Sommaruga (left), former President of the Swiss Confederation, and members of her delegation at the Jubilee House. Picture: SAMUEL TEI ADANO Follow @Graphicgh

President Nana Addo Dankwa Akufo-Addo has said the government is committed to ensuring that about 10 per cent of Ghana’s energy mix comes from renewable sources by the end of the decade.

He has, therefore, welcomed collaboration between the country and the Swiss government to attain the target.

President Akufo-Addo said this when he hosted the Swiss Minister of Environment, Traffic, Energy and Communications, Ms Simonetta Sommaruga, to a working lunch at the Jubilee House in Accra yesterday.

Ms Sommaruga, who is also a former President of the Swiss Confederation, is on a three-day visit to the country.

The two countries set out a road map for the swift implementation of a climate partnership agreement they signed in November 2020.

Ms Sommaruga initialed for her country, while the Minister of Environment, Science, Technology and Innovation, Dr Kwaku Afriyie, signed for Ghana.

Parliament is expected to ratify the agreement to pave the way for its full implementation.

Switzerland is a global pioneer in climate protection, setting a standard for international climate projects that respects both human rights and nature.

In recent months, Switzerland has signed bilateral agreements with Ghana and Peru for carbon offsetting projects in the two countries.

Ahead of the signing of the road map, Ms Sommaruga held discussions with the Minister of Energy, Dr Matthew Opoku Prempeh; the Minister of Finance, Mr Ken Ofori-Atta, Dr Afriyie and a host of experts from Ghana and Switzerland.

The discussions focused mainly on measures to implement Article 6 of the Paris Agreement.

President Akufo-Addo traced Ghana-Switzerland relations to the advent of the Basel Missionaries in the country and said the relations had grown over the years.

He said cocoa continued to play a dominant role in the relationship between the two nations, adding that Ghana had reliable consumers of its cocoa in Switzerland.

The President also mentioned education and the environment as some of the sectors in which the two countries were collaborating.

Ms Sommaruga described the visit by President Akufo-Addo to Switzerland last year as fruitful and said it further strengthened the relations between the two countries.

She also said the private sector could benefit from the carbon credit system laid out in the Swiss-Ghana bilateral agreement.

Switzerland, according to her, intended to allocate CHF65 million for economic development and cooperation in Ghana.