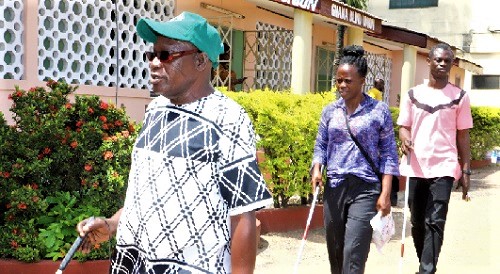 The Ghana Blind Union (GBU) has appealed to the government to provide persons with visual impairment with white canes as part of efforts to promote social inclusiveness.

According to the Executive Director of the union, Dr Peter Obeng-Asamoah, only about 30 per cent of the estimated 230,000 visually impaired people had access to white canes.

“This is not good and it is not too much to ask the government to provide us with white canes. We should have a system that does that because the canes are basic mobility tools,” he said.

Dr Obeng-Asamoah made the appeal at a press conference in Accra yesterday as part of activities commemorating the White Cane Safety Day which was observed on October 15,2022.

The commemoration was on the theme: “The white cane, a tool for social inclusion”.


The executive director said the provision of white canes was the first step towards making blind people independent to be able to contribute their quota to national development.

“We are part of the social collective and we want to have the opportunity to contribute to our own development, that of the community and the nation at large,” he added.

Dr Obeng-Asamoah said the white cane also provided the visually impaired with the opportunity to navigate their environment a lot better, while avoiding over-dependency on family and loved ones.

According to him, the visually impaired did not need sympathy but empathy, accompanied by an enabling environment, to succeed.

The First Vice-Chair of the GBU, Janet Alamisi Dabire, said the provision of white canes for persons with any form of visual impairment would them to enjoy their freedom of movement, as enshrined in the Constitution.

“Our Constitution guarantees freedom of movement, yet there is a section of the populace who do not have the ability to move about freely,” she said.

She said it was important that more attention was placed on the white cane to ensure that visually impaired and partially sighted persons were availed the opportunity to lead dignified and productive lives.

She also called on corporate organisations to make the provision of white canes a priority and part of their corporate social responsibility (CSR).

Ms Dabire also urged the media to help champion the cause of visually impaired persons in the country.